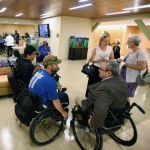 Veterans Administration Long Beach held its grand opening for a Long Term Care Unit designed for veterans that have sustained a spinal cord injury or disorder and are not able to live independently or with family.

Lyndon Wells considers himself one of a lucky few in Long Beach.

The 91-year-old U.S. Coast Guard veteran was paralyzed in a car crash in 1959. Today he is among 12 spinal cord injury patients at the U.S. Department of Veterans Affairs Long Beach Healthcare System’s newest center — a state-of-the-art long-term care facility that officials say is the only one of its kind west of Mississippi.

Local and national VA officials and members of Paralyzed Veterans of America dedicated the center, which has been open for about a week, at a ribbon cutting Wednesday afternoon. So far, four of the 12 rooms are filled.

The unit is designed for veterans suffering from a spinal cord injury or disorder and who are not able to live independently or with family, according to information provided by the VA. Each room is private and gives residents access to 24-hour care.

The rooms serve to provide a permanent home for each resident and comes with a centralized control unit that allows patients to change such settings as the lights and bed position; access the internet and watch television on their own.

The controls can be operated via a touch screen, or customized with voice command or eye movement detection for patients who can not use their hands and arms.

The facility is the sixth long-term care unit the VA operates.

Robert John Grant, a 61-year-old U.S. Army veteran who suffered a traumatic brain injury in 1975, was nearly speechless after seeing the rooms.

“It’s heaven-sent,” he said. “They’re so beautiful. I’m beyond words.”

Building on a legacy

Dr. Ernest Bors, whose work at the Birmingham General Army Hospital in Van Nuys — now a complex of schools — after the World War II helped set the standard in the field and oversaw the development of the Long Beach VA, he said.

Now Fisher hopes the facility will be a model for other VA centers across the nation.

Getting the facility built has been a decade long journey that would not have gotten off the ground without advocacy from Paralyzed Veterans of America, a nonprofit organization representing paralyzed veterans, said Dr. Sophia Chun, now national director for the VA’s spinal cord injury program. Chun used to run the program in Long Beach..

Facilities similar to Long Beach’s might be increasingly in demand in the coming decades because at least 40 percent of the nation’s veterans are 65 years or older, Chun said.

“VA hospitals will be the final resting place for a lot of veterans,” said Al Kovach, Jr., national president of the nonprofit veterans group. “There was a time when spinal cord injury patients didn’t live very long. [They] have unique needs. We need quality long term care to ensure older veterans have a place to live their older years in dignity.”