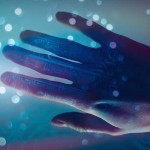 “We’ve completed the circuit,” said DARPA program manager Justin Sanchez. “Prosthetic limbs that can be controlled by thoughts are showing great promise, but without feedback from signals traveling back to the brain it can be difficult to achieve the level of control needed to perform precise movements. By wiring a sense of touch from a mechanical hand directly into the brain, this work shows the potential for seamless bio-technological restoration of near-natural function.”

The clinical work involved the placement of electrode arrays onto the paralyzed volunteer’s sensory cortex—the brain region responsible for identifying tactile sensations such as pressure. In addition, the team placed arrays on the volunteer’s motor cortex, the part of the brain that directs body movements.

Wires were run from the arrays on the motor cortex to a mechanical hand developed by the Applied Physics Laboratory (APL) at Johns Hopkins University. That gave the volunteer—whose identity is being withheld to protect his privacy—the capacity to control the hand’s movements with his thoughts, a feat previously accomplished under the DARPA program by another person with similar injuries.

Then, breaking new neurotechnological ground, the researchers went on to provide the volunteer a sense of touch. The APL hand contains sophisticated torque sensors that can detect when pressure is being applied to any of its fingers, and can convert those physical “sensations” into electrical signals. The team used wires to route those signals to the arrays on the volunteer’s brain.

In the very first set of tests, in which researchers gently touched each of the prosthetic hand’s fingers while the volunteer was blindfolded, he was able to report with nearly 100 percent accuracy which mechanical finger was being touched. The feeling, he reported, was as if his own hand were being touched.

“At one point, instead of pressing one finger, the team decided to press two without telling him,” said Sanchez, who oversees the Revolutionizing Prosthetics program. “He responded in jest asking whether somebody was trying to play a trick on him. That is when we knew that the feelings he was perceiving through the robotic hand were near-natural.”

Sanchez described the basic findings on Thursday at Wait, What? A Future Technology Forum, hosted by DARPA in St. Louis. Further details about the work are being withheld pending peer review and acceptance for publication in a scientific journal.

The restoration of sensation with implanted neural arrays is one of several neurotechnology-based advances emerging from DARPA’s 18-month-old Biological Technologies Office, Sanchez said. “DARPA’s investments in neurotechnologies are helping to open entirely new worlds of function and experience for individuals living with paralysis and have the potential to benefit people with similarly debilitating brain injuries or diseases,” he said.

In addition to the Revolutionizing Prosthetics program that focuses on restoring movement and sensation, DARPA’s portfolio of neurotechnology programs includes the Restoring Active Memory (RAM) and Systems-Based Neurotechnology for Emerging Therapies (SUBNETS) programs, which seek to develop closed-loop direct interfaces to the brain to restore function to individuals living with memory loss from traumatic brain injury or complex neuropsychiatric illness.

For more information about Wait, What? please visit: www.darpawaitwhat.com.