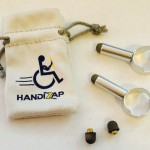 RICHMOND, VA (WWBT) – When we first met Joshua Smith back in March, he introduced us to the Sixth Digit.

It’s a lofty invention, which allows people who don’t have adequate use of their arms and hands to type and press buttons easier.

“We shipped over a hundred rings out to different countries and states and rehab centers and non-profits for sampling,” Smith says.

That’s just the beginning. Along with his mother, Caroline, and good friend, Jared Rhodes, Josh is looking to change other people’s lives for the better.

“It’s good to have somebody like Josh who has got an engineering mind and he is a patient building products for other patients,” Jared Rhodes says.

In August of 2014, Joshua Smith had a life changing accident that would leave him paralyzed. His mother remembers it as if it were yesterday.

“The phone call was devastating, and to go to the hospital and to realize that your son’s life has just turned upside down, was horrific,” Caroline Smith said.

Fast forward a year after that tragedy and you’ll find him in good spirits part of the credit goes to his invention.

Right now, Josh’s company is in talks with medical companies to mass-produce the Sixth Digit, eventually reaching millions of people in need.

“It’s really overwhelming to think that someone, like myself, has invented a product to help people and these global companies are contacting me wanting, to help distribute and talk about manufacturing here in America,” Josh says.

The project is a major breakthrough for Josh and his team, who all had a different outlook in life one year ago.

“It’s just exciting to see how he has taken this horrific injury and turned it into something positive, not only for himself, but for others as well,” Josh’s mother says.

For more information on the Sixth Digit visit Handizap.com.