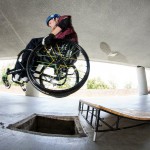 As Robert Thompkins climbed to the top of Green Valley Falls in September 2005, he had no idea that in a few short moments he would never walk again.

He made the decision to jump off a cliff into the water below, never knowing how incredibly shallow it was. As he hit the rocks beneath the surface, he severed his spinal cord from the T12 to the L3 vertebrae. He was 25.

Such an accident can either destroy a person’s ability to see the beauty in life or reinforce it. The now 33-year-old Thompkins chose the latter.

Earlier this week he told me about his experience, and there was never a woe-is-me moment.

“It’s something that only I’m to blame and I’ve been lucky for the support I’ve received from friends and family,” he said calmly. “I just had to accept the cards I was dealt and I got on with it.”

There’s a strength that comes with living through a near-death experience.

“It’s taught me a lot about life and how you should cherish your time and what you’ve been given. Don’t take anything for granted,” he said of how the experience changed him.

Before the accident, Thompkins was an avid skateboarder and it was something he missed dearly in his new life without the use of legs. As he looked out the window while riding the bus to work, he would imagine skating down some stairs.

“I’d be looking at stairs, hand rails, gaps and other things and I would tell myself it was possible. Since then, I’ve just been on a mission to make it all a reality,” Thompkins said.

As the urge grew to skate again, he eventually asked a friend to help him weld a chair that could hold up to jumps. They came up with a chair he could take into skate parks and to his surprise it worked fairly well.

Thompkins soon linked up with a wheelchair manufacturer named Colours and together they developed a chair for Thompkins’ specific needs. “I threw ideas out there and together we came out with what has proven to be, in my opinion, the best chair available. It’s been two years so far and the chair continues to stand up to whatever I put it through.”

Thompkins also has taken on a role as mentor to people who are dealing with their own injuries. He is active with the Life Rolls On foundation and has plans to start his own nonprofit one day.

Since 2013, Thompkins has linked up with Mike Sanchez, who has a son with spina bifida, and they decided to start a support group called Looking Beyond the Wheels. They would like to get to a full nonprofit status so they can enrich the lives of other adaptive athletes. Until then, Thompkins keeps moving forward, helping people whenever he can.

I asked him what guidance he would give to other athletes facing a challenge similar to his.

“My advice would be no matter what challenges you’re facing, just accept what it is and keep moving forward,” Thompkins said. “No one is promised tomorrow so you may as well live the life you love while you can.”

Those are some words we can all live by.

Follow Robert Thompkins on Instagram @that619chair_man. For more information about the Looking Beyond the Wheels support group, go to lookingbeyondthewh.wix.com/lookingbeyondwheels.

Doctors on the Scene Acted Quickly to Treat Everett With Cold...