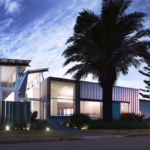 A WORLD-FIRST resort and health spa for people with spinal cord injuries is nearing completion on the northern beaches.

The $22 million Sargood On Collaroy has uninterrupted views of the beach and includes 17 specially built, self-contained apartments.

The resort will be partly owned by the State Government’s Icare, the Sargood Foundation and an unknown philanthropist.

Sargood Foundation director Rod Macqueen said the centre would be officially launched on Friday but would undergo trials before opening to the general public early next year.

“It is specifically designed to be a wellness place for people with spinal cord injuries that can work in a community that is totally receptive of them,” Mr Macqueen said.

“The whole area, including the beach club, surf club and golf club, has easy access for wheelchairs.”

The resort, to be run by Royal Rehab, would cater for people at all stages of spinal injury, Mr Macqueen said.

“It will be for all sorts of people,” he said.

“It might be for people who have had an injury 10 years ago and are doing it a bit tough or someone who lives in the country and wants to see the latest technology.

“It would also cater for someone who has just had an injury and wants to make alterations to their home and to have a look at what the most up-to-date modifications are.”

“People who are living in the community, once they have been through hospital and rehab they don’t really want to go back there.

“We are trying to make Sargood On Collaroy a centre of excellence that people want to come back to because it is a resort, not hospital or rehab.”

“We are looking at different ways to give people exposure to different working opportunities, whether that be work experience placements, vocational training or just trying to find ways to inspire people back into the workforce,” he said.

The centre would charge people for services but most would be covered by insurers and NDIS, he said.

The Sargood Foundation
Sargood on Collaroy

Man In Motion to carry Olympic Torch in Richmond