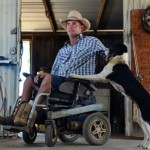 IN THE final minutes of 2003 at a New Year’s Eve rodeo at Townsville’s Black River, Steven Elliott bucked off a bronc called Spaghetti Western and partly severed his spinal cord.

He welcomed New Year in Townsville Hospital as a quadriplegic. His C6 and C7 vertebrae had dislocated and damaged his spinal cord.

Mr Elliott, 39, is in a wheelchair, but you wouldn’t know it, hardly. The chair itself, covered with bulldust and with a dusty, oilskin-covered water bottle on the foot bar, looks more like something out of a Mad Max movie.

He has never let the accident slow him down. Summer time sees him in his shed in Winton making branding irons for clients all over Australia and training his working dogs.

In winter he sets off on the working dog competition circuit, towing a modified horse float he uses as a sort of mobile motel room. The horse float ramp provides a perfect entry point to the float’s interior.

He developed an interest in training working dogs after the accident. Winton trainers Jim and Rhonda O’Connell and his Uncle Pauli talked him into getting one. It grew from there. Other people have helped. Sue and Marty Mitchell let him train his dogs on their cattle.

“People help me so much. A group of local people put in and bought me a better wheelchair. A lot of great people have helped me out. They gave me confidence to do things and they still do,” he said.

Mr Elliott said he had always been around dogs, but once he started training them, a new world opened up.

“Uncle Pauli told me that training a dog is no different than breaking in a horse. He was right. It’s just unbelievable what they can do. A bloke said to me once ‘if you’ve ever had a good dog, you’ll never be without one’. He was right. You see a bloke with a dog he doesn’t know how to train and so he gets rid of it and says he’ll never have another one. But you get a bloke with a good dog, and he’ll always have dogs. He knows what they can do,” he said.

He makes branding irons from stainless steel. He’s made them for giant pastoral houses such as AACo and for celebrity farmers like Brisbane Broncos coach Wayne Bennett. For the record, Coach Bennett’s brand is lazy VW1. When burnt into the hide it looks like “>W1”.

In the old days brands were heated up in the coals of hot fires. Gas heating has largely taken over but Steven says fire heated brands are still in use.

“Gas costs money. Some people still use coals. I had an old bloke here say to me the other day that he had more money when he just had a stock whip and spurs. Now they run around in $20,000 buggies and hire helicopters for mustering,” he said.

He is continually asked to make logo brands for horse studs. He has done one of a surfer riding a wave and of a bare foot with four toes.

Possibly, American horse and cattle ranchers would go nuts for his designs, but Steven is happy doing what he is doing. He hasn’t got a website. Doesn’t want a website.

“There’s no shortage of work,” he said.

Artist paralyzed by bullet learns to paint intricate designs with a...