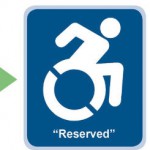 Connecticut Gov. Dannel P. Malloy is on board with changing the handicapped parking symbol on signs throughout the state.

Jonathan Slifka, the governor’s liaison to the disability community, said he made Malloy aware of the “Change the Sign. Change the Attitude” campaign spearheaded by the Arc of Farmington Valley, also known as FAVARH.

If the General Assembly adopts the legislation, which still has a long way to go to becoming law, the new logo would replace the current stick figure in a wheelchair with a sleeker wheelchair design that represents a person tilted forward and on the move.

Slifka said the proposal is revenue neutral because it the new signs will only get added when an old sign has to be replaced. It gives the Department of Administrative Services Commissioner the ability to replace the old signs with the new ones after Jan. 1, 2017.

But not everyone in the disability community is happy with the new symbol.

Cathy Ludlum, who has spinal muscular atrophy and uses a motorized wheelchair to get around, feels like the new sign makes an unnecessary judgment about those with more severe disabilities.

But the old sign has been described by proponents of the change as “blocky and rigid.”

“I am blocky and rigid!” Ludlum said in September after a press conference with advocates.

“The old symbol leaves everything up to the imagination,” she said. “The new symbol seems to say that independence has everything to do with the body, which it doesn’t. Independence is who you are inside.”

Slifka said he hopes that critics look at the “spirit of the sign rather than the literal vision of the sign.”

The old sign conveys a sedentary, unproductive individual, which Slifka said isn’t the message that should be conveyed for even the most severely disabled.

The new legislation would also remove the word “handicapped” from the sign. The new signs would say “reserved parking permit required.”

Stephen Morris, the executive director of FAVARH, started a campaign to change the symbol five months ago.

His online petition has been signed by more than 2,000 people.

The new symbol is universally viewed as a more positive depiction of a person who has accessibility needs,” the petition says. Additionally, “no one with an accessibility need wants to be thought of as ‘handicapped’.”

Many of the commenters who signed the petition agreed.

“I am signing to ensure that the public’s attitude will shift as a result,” Susan Orlando of Oakdale said.

Others felt the same way.

“I think it is time to change attitudes about people in wheelchairs and focused on their capabilities,” Dorothy Paleogos of Canton said.

The legislation has been referred to the General Administration and Elections Committee.