Scientists Connect Neurons in the Lab for the First Time 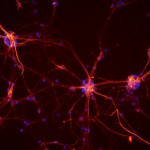 Injuries to the central nervous system — the brain and spinal cord — are particularly devastating because the body doesn’t regenerate neurons to repair connections between vital circuits and restore function. In other words, the damage is permanent or even fatal.

A variety of early studies in animals and humans indicate the field of neural regeneration research is advancing. A 20-year-old man in Naples, Florida recently enrolled in the first clinical trial to assess the ability of stem cells to repair spinal cord injuries. But, a team of scientists from McGill University in Montreal, Canada, are working an entirely different method to inject hope into an otherwise bleak prognosis.

Working with rat neurons grown in a petri dish in the laboratory, the team artificially connected two neurons using an atomic force microscope and tiny, polystyrene spheres. Though the work is an early proof-of-concept, it could lay the foundation for novel surgeries and therapies for people with brain and spinal damage.

Atomic force microscopes drag an ultra-fine needle, or microprobe, attached to a cantilever beam across the object it is observing. The microprobe rises and falls like a record player needle as it passes over the object’s physical features. A laser measures the cantilever’s motion to build a picture of the object.

Researchers used a specialized microprobe to grab on to an axon, the part of a neuron that connects it to others in the brain, and stretch it across the dish to connect it to another neuron. Their microprobe takes advantage of minuscule forces between objects at the atomic level to grasp the polystyrene spheres, which in turn hold the axon. You can see the thin filament of the axon trailing behind the probe in the video above.

Peter Grutter, a senior author of the paper, likened the process to pulling a piece of chewing gum apart. In this case the gum, or axon, was roughly 1/100 the width of a human hair. Because of this, the researchers had to be extremely careful both when stretching the axon and when they detached it from the probe, Grutter said in an email. In all, the researchers only stretched the axon about 1 mm, a small span when compared to the size of the brain, but enough to do the trick. By using a larger dish, the researchers think they can extend their artificial neural connections out to a length of several millimeters.

Researchers tested the artificial connection by measuring the neuron’s electrical potential. It responded similarly to organic neurons, indicating the synthetic network was functional. And although the process is complicated, researchers say their method still creates neural connections 60 times faster than our bodies can.

Our brains grow in complexity and ability by forming more and more connections between the neurons they are composed of. New experiences, thoughts and memories all create their own special connections in our brains. Rewiring neural networks ourselves could give us the ability to not only repair neural networks that have been damaged by injury, but to create our own.

Functional applications of this technology remain years away, but this method could be used to treat patients who have suffered traumatic injuries that severed connections in their brain, or to treat degenerative neurological diseases by strengthening the brain’s neural circuitry. In the near-term, this approach creates opportunities to grow and test neural networks in the lab to study how the brain works.

Got your bars down?