Do the Paralyzed Have a Medical Right to This $70K Exoskeleton? 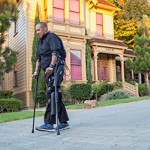 American insurance providers are being faced with an interesting health care debate: Should walking be considered a need?

At the center of this debate are exoskeletons — motorized devices that allows those with spinal cord injuries to stand upright and walk. So far, the ReWalk system is the only exoskeleton in the United States that has been approved by the FDA. However, it costs close to $70,000.

ReWalk announced that a commercial health plan will provide coverage for a personal exoskeleton system. The beneficiary of this ReWalk is a surgeon who has been bound to a manual wheelchair for 11 hours a day at work. The patient’s insurance provider initially denied his/her claim, but it was overturned by an independent medical review board.

“The ruling by the independent medical organization marks an important moment for exoskeletons being accepted as protocol technology for those with spinal cord injury,” said Larry Jasinski, ReWalk CEO. “Health benefit providers have historically been hesitant to acknowledge the clinical benefits in their case assessments. This ruling, and subsequent coverage and reimbursement, will help ReWalk in our efforts to facilitate greater patient access to the device.”

The decision could help set a new precedent for claims in the future from other patients that suffer from spinal cord injuries. With any new technology, it will take time before corporate institutions categorize it properly.

The board cited that there was “sufficient evidence found in current peer-reviewed medical literature to support the use of the ReWalk device in patients with spinal cord injury.” The benefits of exoskeletons have been documented. One case study in a peer-reviewed journal demonstrated how the use of the ReWalk system could help improve the quality of life for those with spinal cord injuries. The six-month study saw improvements in the patient’s heart function, motor skills, pain management, and control of bladder and bowel functions.

Other developers are working on improving exoskeleton designs to help bring better quality of life and reduce the secondary injuries that come with sitting. The costs for production will go down as researchers continue to advance the field of robotics for the purpose of going a step beyond the wheelchair. But until the costs come down, the right to walk will be determined by health providers. Let’s hope the decision made by this independent review board has set the right precedent.

Photo Credit: LONDON, ENGLAND – MAY 08: Claire Lomas shouts with joy as she passes Buckingham Palace as she walks the last mile of the Virgin London Marathon on May 8, 2012 in London, England. Ms. Lomas, who is paralysed from the waist down after a riding accident in 2007, has taken 16 days to complete the 26.2-mile route. Starting out with 36,000 other runners she has averaged 2 miles a day with the help of a bionic ReWalk suit. (Photo by Peter Macdiarmid/Getty Images)