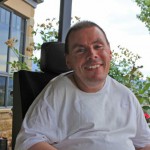 Lee Bullock cannot move most of his body, but he still does more with his time than many able-bodied people.

Mr Bullock became quadriplegic at the age of five after he was hit by a car.

He has been in a wheelchair for more than three decades, which he described as a “very long time to be sitting on your bum”.

But he does not let his wheelchair slow him down, spending his time writing songs and screenplays.

Due to his physical limitations, Mr Bullock is not able to play his own songs.

In 2014 he sought the help of friend Matt Massey to record a number of songs using the name The Atlas Of Tears.

“At the end of 2014 I put out an EP … basically just a bunch of demos that me and a friend did on the computer,” Mr Bullock said.

He said he was slightly disillusioned after its release due to a lack of public interest.

However, last year he submitted one of his songs to the Australian Songwriters Association Contest.

We All Love You was voted into the top 30 songs in the spiritual category.

This success inspired Mr Bullock to get back into a creative headspace.

“I’ve started to get back into music. It definitely is something that I love.

“I think I’m good at writing and it’s an outlet for me and lets me express myself.”

“In my early 20s I was going through a hard time myself,” he said.

“I wasn’t in a very positive frame of mind and that’s when I found the music of Elliott Smith, and he’s been quoted as the saddest man in the land.

“I credit his music with helping me get through those dark times that I was going through.”

Mr Bullock’s songs are filled with lyrics exploring emotion — sometimes dark and brooding thoughts and feelings which conflict with the positive man you meet.

“I’m always really honest and I don’t mind throwing out my feelings, whether they’re negative or positive,” he said.

“I firmly believe that dark, sad, raw songs, raw emotions can help other people, if they want to be helped.”

Mr Bullock said he had also been writing screenplays and had a short film script that he was keen to turn into reality.

“When I was a kid, movies were basically my babysitter,” he said.

“I’d love to do a short film, write and direct it.

“Movies and music have always been pretty big passions and I think they will always be.”

Fund-raiser will help injured student find more independence – with a...