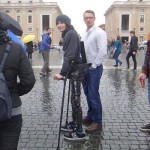 After inventing the first-ever untethered bionic exoskeleton, he broke from his former company. Now this inventor is back with another breakthrough.

The man behind the first untethered bionic exoskeleton is back with a new robotic suit.

Homayoon Kazerooni led the team that developed BLEEX, the first viable actuated suit that didn’t need to be plugged in, back in 2005. Groundbreaking at the time, the technology was eventually spun off into Ekso Bionics, long a darling of the Bay Area hardware scene.

Kazerooni, whose reputation as a genius with a stormy personality is a touchstone among ex-colleagues, split from the company soon after it was formed and has been pursuing his own projects.

His latest is SuitX, a robotics company in Berkeley that’s developed a new exoskeleton called Pheonix that’s designed to enable paraplegics to walk.

It’s an interesting move. After a lot of soul-searching, Ekso has been moving away from targeting spinal cord injury sufferers because it’s a relatively small market. They’re now focused on the much larger stroke market and their device is marketed as a therapeutic tool to aid recovery, and not for mobility.

Kazerooni has long been an advocate of restoring mobility for spinal cord injury patients. In 2011, test pilot Austin Whitney, a Berkeley student suffering from lower limb paralysis, walked for commencement in one of Kazerooni’s suits.

Pheonix is modular and the lightest available exoskeleton, weighing in at 27 pounds. It costs $40,000 — that’s the least expensive of all exoskeletons being produced now. suitX also just won the $1M top prize at the Robotics for Good competition where they presented their plan to build a pediatric version of the exoskeleton to help children with neurologic disorders.

By Greg Nichols for Robotics ZDNet

Veterans offer their thanks

The SENSIMAT for Wheelchairs – Indiegogo Campaign