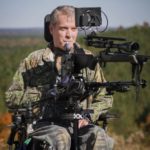 MERIDIAN, Miss. — A little more than 30 years ago, as an 11th grader, Evan Edwards broke his neck during a tackle in a football game. A C4-5 quadriplegic, the eastern Mississippi man cannot move his lower body, wrists or hands.

He eats by moving special utensils tucked into his wrist brace with his shoulder and elbow. His Mississippi State University cup — representing his alma mater — hooks onto his arm so he can drink from the extra-long straw. A pointer on the end of his brace acts like a finger, pushing the buttons that unlock his van and activate his voice-command environmental controls.

Despite his disability, Edwards still does the things he loves. He paints landscapes holding a paintbrush in his mouth and hunts, preferring to spend as much time outdoors as possible.

“(Before my injury) I was never one to stay inside,” Edwards, who spends most of his time in a motorized wheelchair, said. “I was always riding bikes, in the woods — could be hunting — but just always doing stuff outside.”

Thanks to technology, Edwards can hunt with a motorized gun mount. Using a joystick guided by his chin or mouth, he aims and a solenoid pushes on the gun, activating the trigger by sipping on a tube.

In the 10 years Edwards has been hunting with the motorized gun mount, he said, he has shot 22 times and killed 17 deer.

At Cross Mountain Ministries in Kemper County, Mississippi, Edwards meets with a group of hunters with disabilities. Earlier this month, the group met for an all-day hunting trip — complete with two meals and opportunities to socialize. Whenever Edwards meets another person with a disability, he invites him to join the group and get back outdoors.

“I enjoy being outdoors,” Edwards said. “Being able to do something that some able-bodied people can’t do… Some hunt for years before they kill their first one. But also I enjoy helping others to be able to get back out, whether they’ve done it before or they’re doing it for the first time.”

The Edwards family sought out the resources of the Mississippi Department of Rehabilitation Services after Edwards’ mother, Margie, started having difficulty with her rheumatoid arthritis.

“My parents are getting older and can’t quite do what they used to do,” Edwards said. “(MDRS) has helped me be more independent in my home… Even just being able to get inside and outside my house by myself.”

Nationwide, similar rehabilitation-focused state agencies provide disabled people and their families resources and services related to everything from care options and vehicle modification to employment and home/workplace modification.

MDRS assigned Edwards a counselor and provided him with two personal care assistants on alternating schedules — giving his primary caregiver, his mother, a well-deserved break while also assisting Edwards in his day-to-day activities.

“Because (my parents) can’t do what they used to do,” Edwards said. “Now we have someone from outside the home come and take care of (things).”

“That was a long process,” he said. “I wanted (my driver’s license) as a goal and I wouldn’t have done it without their help.”

The van, modified in Starkville, Mississippi, takes voice commands and has two different joysticks that allow Edwards to drive, steering with his right hand and accelerating with his left. The modifications mean Edwards never has to touch the steering wheel or pedals.

For Edwards, with the support of MDRS and some helpful modifications, independence despite his disability is something he gets to relish each day.

“(With MDRS) you’re doing as much for yourself as you can,” Edwards’ counselor Abbey Rush said. “We don’t want anyone in any sort of facility… When you’re happy, comfortable and with your family you thrive more than in a nursing home.”