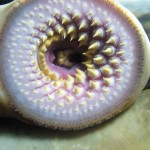 At last week’s Science Before Supper, a lecture series about science for non-scientists at the Falmouth Public Library, Jennifer Morgan from Marine Biological Laboratory, spoke about the sea lamprey and what it can reveal about the human nervous system and the potential for regeneration after spinal cord injury.

The lamprey, an eel-like parasitic fish, has a true spinal cord, but, unlike people, when its cord is injured, the lamprey recovers.

“If you sever the lamprey spinal cord in a couple of months, they go from paralysis to swimming,” Dr. Morgan said.

Early in her career, Dr. Morgan began studying the lamprey to learn about how neurons communicate with each other. The lamprey has a simple physiology with large neurons and at the junctions where they meet and signals pass, the synapses are easily accessible.

Now she along with collaborators from University of California Los Angeles (UCLA) are investigating how the lamprey spinal cord recovers and how this may apply to spinal cord injury in people.

On the genetic level, people and lampreys are not so different.

“Lampreys have the same genes, and they can regenerate, but we can’t,” she said.

Dr. Morgan said when a lamprey is injured, it makes new connections, but a smaller number than before. After injury, some of the cells regenerate and some die. In those that die, there is a buildup of protein called synuclein, which is toxic to the cells.

With collaborators at the UCLA, Dr. Morgan identified a drug, CLR01, that targets synuclein’s accumulation in damaged lamprey neural cells and increases the cells’ survival. The results were published in the journal Experimental Neurobiology in February 2016.

Applying these findings to people is still in the future. Any therapy would need to be tested in other animals, including mammals, before it reaches humans.

“Any novel finding has a potential for a patent, which ultimately keeps the idea around and continues to push the science forward,” Dr. Morgan said.