Quadriplegic Kiwi wakeboarder Brad Smeele back on the water 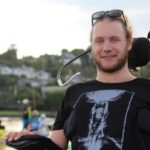 Brad Smeele, pictured here at the recently opened cable wake park at Auckland’s Onehunga Lagoon, has been out on the water to watch his mates wakeboard on Lake Maraetai near Mangakino.

Once Brad Smeele was carefully lifted on to a speedboat for a rare excursion since a wakeboarding accident left him as a quadriplegic, he didn’t quite take to the trip like a duck to water.

The 29-year-old New Zealander, who has no feeling from the neck down since suffering a serious injury while wakeboarding in Florida in 2014, admitted to experiencing mixed emotions after watching Brant Hales, David Stubbs, Paul Maguire and Shawn Watson showcase his beloved sport on Lake Maraetai, near Mangakino.

“It’s always going to be bittersweet, but it’s definitely more sweet than bitter,” he said, before boarding.

And once the trip was over, Smeele admitted: “Sometimes I wonder why I do this to myself. Maybe it would just be easier to put wakeboarding behind me.

Brad Smeele’s Day on the Water by WakeboardingMag
“I honestly never thought that such amazing times in my past could become such painful memories. But I guess I love it more than it hurts.”

Still, he smiling – and defiant – as he was carried from the boat to his wheelchair.

“I won’t stop fighting for it,” he said, vowing to continue to promote the sport that he loves.

That determination was evident at the new cable wake park at Auckland’s Onehunga Lagoon.

Meanwhile, Smeele recently told his Facebook followers he was able to control his chair with his hand on the joystick for the first time.

“It’s going to be a bit of a process to transfer completely over from a straw in my mouth with the sip and puff control to the joystick …. but it won’t be long until I can talk, eat, drink, whistle, cat call and commentate while driving.”

Smeele said he does not have movement in his wrist or hand – the controlled movement was attributed to strength in his shoulder – but he is able to make small movements to get around at “turtle speed”.

Big Hand For A Big Ride