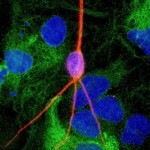 Many believe the ultimate solution in regenerative medicine will be inducing the body to mimic the activity of stem cells without having to transplant any cells. Now, a team at the University of Texas Southwestern Medical Center has used a two step process to turn the scar that forms at the site of spinal cord injury into functioning nerve cells.

They used a process similar to one they used in an earlier project published last September where they reported creating neural networks in the brains of mice. In both cases the researchers reprogrammed the nerve support cells known as astrocytes into functional nerves. Astrocytes tend to be abundant, particularly at the site of injury where they proliferate and form scar tissue that actually prevents regrowth of the damaged nerves.

The Texas team’s first step involved using a biologic substance to manipulate the expression of genes in the astrocytes at the site of spinal injury in the mice. They tried 12 different ones before they found one that is efficient in turning the protective cells into progenitor cells for nerves; think of them as middlemen between nerve stem cells and adult nerve. They then used a common drug called valproic acid to encourage those progenitor cells to mature into functioning nerves.

The work seems to map out a strategy to get new nerve growth directly in patients, or in vivo. The paper was published in Nature Communication and a press release from the university was picked up by ScienceCodex and it quoted the senior researcher Chun-Li Zhang on the impact:

Our results indicate that the astrocytes may be ideal targets for in vivo reprogramming.

However, given the amount of nerve damage that occurs in the elderly, either due to stroke and various degenerative diseases, the study also carries a strong caveat. While they were able to get the nerve reprogramming to happen in both young adult mice and in older mice, it was much less efficient in the older critters. Even in the younger adults it took four weeks to create the progenitor cells and another four weeks to get mature nerves. So the team indicated their next goal is improving the efficiency in both young and older animals.

You can read about some of CIRM’s dozens of projects trying to repair or regrow nerve cells in our stem cells and stroke fact sheet.

Attitude is how we react to life