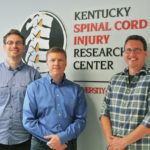 University of Louisville researchers have discovered that a protein previously known for its role in kidney function also plays a significant role in the nervous system. In an article featured in the April 13 issue of The Journal of Neuroscience, they show that the adaptor protein CD2AP is a key player in a type of neural growth known as collateral sprouting.

In the first research to be published on this protein’s role in the nervous system, Benjamin Harrison, Ph.D., a postdoctoral fellow in the Department of Anatomical Sciences and Neurobiology and lead author of the article, and his colleagues show that CD2AP, an adaptor protein, orchestrates a complex arrangement of other proteins that controls the branching of nerve axons, the tendrils reaching out from the nerve cell to connect to other nerve cells, skin and organs. This nerve growth occurs in uninjured nerve cells as they extend their reach and create new connections.

This axon sprouting may be helpful, but too much of it can be harmful. In normal adult cells, this growth creates new connections and can lead to improved functionality after an injury or stroke. However, if the axons sprout uncontrollably, the result can be exacerbated epilepsy, blood pressure spikes or neuropathic pain. The researchers hope this new understanding of the nerve growth process will lead to therapies that can improve healing and recovery of function following nerve damage while minimizing excessive growth.

“Through targeting this molecule, we could help the body’s natural healing process to coordinate the appropriate growth,”Harrison said.

The research team, based in the lab of Jeffrey Petruska, Ph.D., associate professor in the Department of Anatomical Sciences and Neurobiology and the Department of Neurological Surgery and the article’s corresponding author, identified CD2AP as a player in the neurological system via a screen to detect genes associated with neuron growth. Their research examined how CD2AP interacts with various molecules in controlling the neural sprouting process, in particular they studied its relationship with nerve growth factor (NGF).

“People have been studying nerve growth factor and the responses it induces for a while, but this protein (CD2AP) forms a nice link between NGF and the response in the cell,” Harrison said.

Previous research also has associated CD2AP with genetic changes among individuals with Alzheimer’s disease and it may be helpful in understanding the mechanisms involved in Parkinson’s Disease, Huntington’s Disease and spinal cord injuries.

Petruska says this work relates closely to other research being conducted at UofL’s Kentucky Spinal Cord Injury Research Center (KSCIRC). He says that understanding these molecular processes could one day be used to amplify the activity-based therapies such as locomotor training now being done with spinal cord injury patients by UofL faculty at Frazier Rehab Center, a part of KentuckyOne Health. Locomotor training helps spinal cord injury patients achieve functional recovery through standing and stepping activity.

“We are starting to discover that there are different modes of nerve growth and different sets of genes that control different kinds of growth,” Petruska said. “This is particularly important as it relates to locomotor training. When you train, you enhance the growth factor environment of the injured spinal cord, and those growth factors are involved in the axon plasticity. This mode that we study is dependent on the growth factors.”

“My dream,” Harrison said, “is to one day do a clinical trial with a drug that targets this protein and can enhance the ability of the patients to respond to the activity-based rehabilitation (locomotor training) that they are doing at Frazier Rehab Center.”

One member of the research team and a co-author on the publication that first described the role of CD2AP in the nervous system is Cassa Drury, a junior at Louisville’s duPont Manual High School. Drury has worked in the lab of Jeffrey Petruska, Ph.D., associate professor in UofL’s Department of Anatomical Sciences and Neurobiology, since he mentored her during middle school science fair competitions. As a middle schooler, Drury competed in science fairs at the national and international level with her research on the neurological systems of planaria worms under Petruska’s guidance.

In the team’s research into CD2AP, Drury recorded and analyzed changes in the nerve cells for the publication’s primary author, Ben Harrison, Ph.D., a postdoctoral fellow in the Department of Anatomical Sciences and Neurobiology and the article’s lead author. Drury, a high school sophomore at the time, was working in the lab as part of a self-directed learning program offered by her high school.

Drury recorded the length and number of branches in images of neural cells that had been treated with different amounts of CD2AP and those that were not treated to determine the protein’s effect on nerve growth.

“I put them into a program and I was able to trace them. The tracing allowed us to see whether they were growing more than they would normally,” Drury said.

“Cassie was the one who did measurements in the cultured neurons to determine that the protein was a positive regulator of growth,” Harrison said.

That work earned Drury a listing as fifth author on the publication, released in the April 13 edition of The Journal of Neuroscience. A total of 14 authors are credited on the article.

“It was not a gift,” Petruska said. “She did important work for this research and she understands what the work is about.”

Drury is eager to follow the research to which she has contributed.

“I am really interested to see where this research goes,” Drury said. “This connection is a really strong one and I am excited to see what comes out of it and what Ben ends up doing. I hope he can hand them a drug. That would be wonderful.”

This summer, Drury will be attending a science ethics leadership seminar at the University of Notre Dame on the ethical considerations of scientific research. After high school, she plans to study science in college, perhaps along with communications.

“One of the things that allowed Cassie to have such success in the science fair is that she is very good at communicating her results and her experiment design. She is good at answering questions,” Petruska said.

Realising There Is Life After Spinal Cord Injury Inspired Me To...