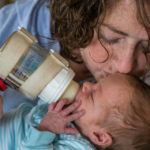 As each of her children grew inside her womb, Joni Vanderwoude felt nothing — not the fluttering first kicks in the beginning, not the bulging of her belly as it stretched to the size of a basketball, not the piercing contractions of labor that usually signal it’s time.

A car accident 16 years ago left Vanderwoude paralyzed from the neck down, unable to walk, cough or even scratch her own nose without someone to do what her own body could not. But Vanderwoude, of DeMotte, Ind., has never dwelled on the limitations of being a person with quadriplegia. Two years after the accident, she married her high school sweetheart. Four years after that they began trying to have children — a medical possibility for most women who suffer from spinal cord injury, despite what people might assume.

Today, Vanderwoude, 36, is the proud mother of three healthy children whom she conceived with her husband and delivered: 6-year-old Jacqueline, who covers the kitchen counter with Legos; 2-year-old Ryleigh, who performs somersaults in the living room; and 6-week-old Zachary, who spends most of his days sleeping on his mother’s chest in a baby carrier fastened to the back of her wheelchair.

Pregnancy for women with paralysis is still uncommon. Vanderwoude, who delivered her children at Northwestern Memorial’s Prentice Women’s Hospital, is the only mother with quadriplegia her doctor has treated in the last decade. Carrying babies in a paralyzed woman’s already challenged body comes with risks, including dangerous blood clots and high blood pressure. 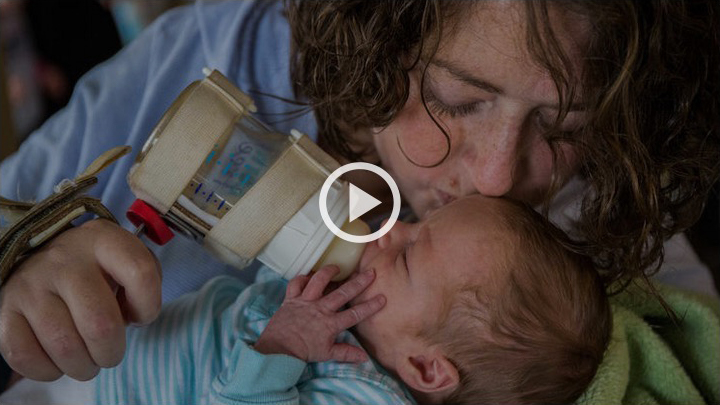 But doctors and spinal cord injury researchers say Vanderwoude is an inspiring example of how advances in fetal medicine, adaptive technology — such as strollers designed to be pushed by someone in a wheelchair — and online support from social media and websites have made it possible for more women with paralysis to enjoy the beauty of motherhood, which often calls on women to draw on strength they might not realize they have.

“I can’t physically grab them, or pick them up,” Vanderwoude said on a recent afternoon as Zachary slept with his ear to her heart. “But just being here, and loving them and being there for them — that’s being a mom for me.”

When a person suffers a spinal cord injury, the communication pathway from the brain to the muscles is interrupted, causing paralysis. Vanderwoude was 20 years old and on her way to play piano at a church service when her car left the road and crashed into a drainage ditch in her rural Indiana hometown, 60 miles southeast of Chicago. She wasn’t wearing a seat belt and was thrown from the car, causing her neck to break in two places, she said.

Doctors told her family and then-fiance Jason Vanderwoude that if she survived the first 72 hours, she would be paralyzed from the neck down. She could no longer kick a soccer ball, attend college or play piano for hours as she had loved to do before the accident.

During the next two years, through extensive rehabilitation, she gained back some use of her biceps, as well as minimal movement in her right wrist. But the progress stopped there. Today, without feeling or use of her limbs and core muscles, another person must turn her over at night so she doesn’t get bedsores. When she wakes up, she needs help with a two-hour process that includes helping her shower, changing her catheter bag, brushing her teeth and changing clothes.

Three days a week, Joni Vanderwoude gets assistance from aides funded by Medicaid. The rest of the week, the wheelchair-accessible house Jason Vanderwoude designed and built mostly himself bustles with activity as volunteers from the Vanderwoudes’ church, Joni’s parents — who live on the same property — and other family members take turns helping.

Joni and Jason Vanderwoude, who consider themselves deeply religious people, say they are blessed to have so much support, and that Joni is still able to talk and laugh with family.

In time, she learned to operate a motorized wheelchair and draw with the help of a special writing tool. Today, using special tools, she can mix brownies, fold the laundry and feed herself a bowl of orange slices with flicks of her wrist. She has learned to rely on helpers or her older children for tasks such as changing diapers or popping a pacifier back in the baby’s mouth. She’s able to feed the baby every two hours — even through the night — with her breast milk. Sometimes, her husband or an aide positions Zachary on her lap to breast-feed directly. Other times, the helpers hook up Vanderwoude to a breast pump.

“I try to have patience. Everything I do, someone’s got to be my hands and feet,” said Vanderwoude, who credits her husband, kids and family with being unwavering in their support. “But I want to be able to do it myself. That’s one of the hardest things.”

Her family, especially her husband, sends the credit back to her.

“She has been, by far, the strongest person through this all,” Jason Vanderwoude said. “Don’t get me wrong, there’s days it just plain stinks, where it’s hard not to go, ‘Why did this happen?’ … But she takes it with a grain of salt. It’s life — and here we are.”

‘It’s not a miracle’

The Vanderwoudes allowed themselves four years after their wedding for Jason, an insurance salesman, to master caregiving responsibilities, from pounding on his wife’s back to simulate coughing, to learning how to quickly retrieve an eyelash from his wife’s blue eyes.

In 2006, the couple decided it was time to follow through on their plans to have a family — and doctors assured them it was possible.

“The uterus is an involuntary muscle,” said Dr. LaTasha Nelson, who delivered two of the Vanderwoude children as part of the maternal fetal medicine practice at Prentice Women’s Hospital. “You don’t actually need to do anything.”

The couple were pleasantly surprised when doctors told them they should be able to conceive a child through sexual intercourse, which, with good humor and a lot of experimentation, the couple had been practicing. “You just work around it and come up with different angles that make things work for you,” said Joni Vanderwoude, who has counseled other paralysis patients on this and other topics.

Women with quadriplegia and paraplegia continue to ovulate and menstruate monthly, even though they don’t feel it and need assistance in managing the periods. When a woman becomes pregnant, hormones allow the uterine lining to build up so it can accept the pregnancy, a process that has no connection to a woman’s muscle ability or lack thereof, Nelson said.

“Don’t get me wrong, there’s days it just plain stinks, where it’s hard not to go, ‘Why did this happen?’ … But she takes it with a grain of salt. It’s life – and here we are.” — Jason Vanderwoude

After 10 weeks, the placenta gets nutrients to the baby from the mother’s supply. And when the baby reaches full term and is ready to be born, hormones, once again, stimulate contractions that push the baby out of the vagina.

People with paralysis are prone to high blood pressure, because damaged nervous systems can’t regulate as they should. They also are susceptible to blood clots, because idle bodies allow blood to settle, sometimes in dangerous places. So patients like Vanderwoude are monitored closely by fetal medicine specialists during pregnancy.

Vanderwoude, who had a dangerous pulmonary embolism — a blood clot in her lungs — during her third pregnancy, took blood-thinning medication. She was required to regularly wear a bootlike device that pumps muscles to create blood flow. And during each of her deliveries, specialists were on hand including hematologists, cardiologists and anesthesiologists who were fully aware of complications related to paralysis.

Nelson delivers as many as 300 babies each year but said she still marvels at the extraordinary — yet routine — wonder of motherhood.

“It’s amazing that things go right so often,” she said. “It’s not a miracle. Not at all.”

Taylor points to slowly evolving attitudes about women with disabilities having children to explain the low numbers.

“Ten years ago, I would say the common question was, ‘Well, do you want to be in a wheelchair with your child?'” Taylor said. “I remember hearing that and thinking, ‘Well, what does that have to do with being a mom?'”

Even if women with paralysis are interested in getting pregnant, many doctors’ offices don’t have the lifts needed to transfer paralyzed patients into reclining chairs or examining tables for checkups. And social media and parent family support programs addressing such topics have only begun to surface in the past five years, said Maggie Goldberg, vice president of policy and programs for the Christopher and Dana Reeve Foundation.

Researchers at TIRR Memorial Hermann are working to change attitudes more quickly. In April, they launched an online campaign focused on pelvic health for women with spinal cord injuries. In a series of hourlong webinars, the country’s leading experts on spinal cord injuries speak frankly to women with paralysis about bladder and bowel problems that affect sexuality, treatments for disorders with sex and how young women with paralysis can manage puberty.

Joni and Jason Vanderwoude acknowledge that raising their family has not been easy.

Their second child, a boy named Nolan, died at 9 weeks from an unknown condition he was born with that caused fatal intestinal blockage, which doctors said was unrelated to his mother’s paralysis. Last month, Jacqueline, their eldest, was diagnosed with Type I diabetes, which now requires Jason Vanderwoude to come home from work at lunch time to administer insulin, because Joni cannot. The Vanderwoudes say because they can’t afford more paid helpers, it becomes stressful coordinating volunteers to be there when Jason or other family members are at work.

Yet the parents choose to focus on all the things they can do.

Joni Vanderwoude said she used to think about how she’d never be able to hold her children’s hands, until at 2 years old, Jacqueline instinctively started grabbing her mother’s pinkie.

She can’t dance on two feet, but multiple times a day, her children climb up the wheels of her wheelchair, plop down on her lap and giggle as she spins them in circles.

And when Zachary fusses, a helper places a Boppy pillow on Vanderwoude’s lap and hooks a bottle onto a brace strapped to her wrist so she can feed her baby.

“There you go,” she coos gently, kissing his head again and again as he drinks. “Oh yeah, there you go.”