‘I decided to have a recovery’: Rhiannon Tracey’s next big step 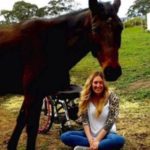 Rhiannon Tracey was two months shy of her 21st birthday when she found herself face down in a pool of water.

In Bali, on a girl’s trip with her mum and best friend, they had returned to the hotel pool after an afternoon of celebrating, when Rhiannon dived in.

She felt her whole body jolt as her head hit the shallows in the pool labelled ‘deep’.

It felt like an “electric shock” had charged through her.

“I remember thinking ‘Oh crap, what have I done’,” Rhiannon recalls. “I didn’t think for a second I’d broken my neck.”

She was, after-all, at an age where “we think nothing is going to happen to us”. Spinal cord injuries are the most common among 15 to 24-year-olds, and more than 80 per cent of those injured are male.

It wasn’t until she realised that she was face down in the water and she couldn’t move her body that she began to panic.

“It was horrific,” says Tracey, wishing the hit had knocked her out so she didn’t remember it.

“I remember being fully conscious from the moment my head hit to the moment I was told I’d broken my neck and back.”

Scans at the hospital in Denpasar confirmed not only did the young veterinary nurse break her neck and back, fragments of broken bone were piercing into her spinal cord.

She was told in no uncertain terms she would never walk again. 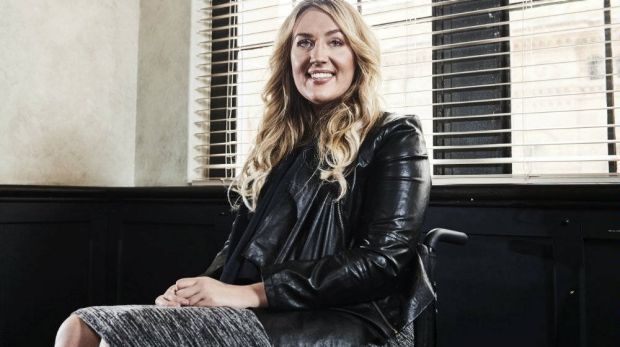 Elated, she told the doctors who cautioned that it was probably a spasm (up to 80 per cent of spinal cord injury patients experience spasms).

She was undeterred. “My big toe was the furthest from my brain so I figured I just needed to fill in the gaps.”

A family friend who is a physical therapist helped to fuel her fight to improve.

“She said ‘Cut the crap. You need to do this. Of course you’re going to be pissed off and upset – use it to start that fire in your belly. Focus on moving your middle finger so that when they say you can’t do something, just show them your middle finger’.”

After six months in hospital, Rhiannon, her mother and step-father raised money for her to travel to the controversial Project Walk, an American-based rehabilitation clinic that offers intense, activity-based programs with the goal of retraining the nervous system.

In 2011, two years after her accident and at the end of three separate stays at Project Walk, Rhiannon she took the biggest step of her recovery; she walked out of the rehabilitation centre.

“I thought ‘I’m a quadriplegic, I shouldn’t be doing this’ …  and here I am doing this,” says Rhiannon, who has been awarded two Australia Day Awards for Access & Inclusion in her community as well the Young Australian of the Year in 2012.

The steps have not only been physical.

“I fell into a deep, dark depression,”  she says of the time following her injury. “I felt like I had nothing to live for – I got quite sick. All I cared about was walking again – I forgot there were other things in life to enjoy.”

She started a non-for-profit, The Next Step which offers therapy, long term physical and psychological support for those with spinal cord injuries.

“We don’t treat clients as disabled,” Rhiannon says, acknowledging that not all those with spinal cord injuries will walk again, “we treat them as injured.”

She also took up horse riding, got five “fur kids”, focused on gaining some independence.

“We can’t always take responsibility for things that happen in our lives,” says Rhiannon, who can now walk with crutches but uses a wheelchair “for endurance purposes”.

“I decided to have a recovery and a life after the injury,” says the 27-year-old, referring to her emotional rehabilitation.

A life that includes plans with her high school love, Mark, who she began dating again in 2014.

“Mark is my prince charming – he is my happy ending,” says Rhiannon, who plans to take part in the spinal cord injury awareness and fundraising event Walk for Life on Sunday.

She has come a long way, she admits, but now has a new goal. “My overarching goal is to walk down the aisle.”

According to the World Health Organisation, every year, around the world, between 250 000 and 500 000 people suffer a spinal cord injury (SCI) (about 300 to 400 in Australia). The majority of spinal cord injuries are due to preventable causes such as road traffic crashes, falls or violence.

Symptoms of spinal cord injury depend on the severity of injury and its location on the spinal cord. Symptoms may include partial or complete loss of sensory function or motor control of arms, legs and/or body. The most severe spinal cord injury affects the systems that regulate bowel or bladder control, breathing, heart rate and blood pressure. Most people with spinal cord injury experience chronic pain.

Wings For Life World Run encompasses 34 locations and 6 continents worldwide, in which everyone runs at the very same time all over the world. The Australian leg will take place in Melbourne on May 8 at 9pm. 100 per cent of entry fees are donated to the Wings For Life Foundation and spinal cord injury research.