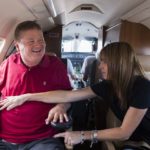 It was two days after the Indianapolis 500 when Sam Schmidt answered his cellphone and was asked if he finally was home, home being Henderson and Lake Las Vegas.

No, he said. He was at a Taco Bell heading for that weekend’s IndyCar doubleheader in Detroit. He said he hadn’t been home in like forever, that of the next 33 nights or whatever, he would sleep in his own bed only four times.

That sounded like a crazy schedule, I said. Maybe I should write a story about his hectic lifestyle.

He said how about next week?

I wasn’t planning to write the story that quickly. But I didn’t tell Sam Schmidt no, because that is a word that does not exist in his vocabulary, not since Jan. 6, 2000, anyway.

That was the day he crashed his Indy car at Walt Disney World Speedway and broke his neck, rendering him a quadriplegic. It was touch and go whether he would live. He remains paralyzed from the chest down.

The attending physician said no, Sam will never walk again, and Sam’s loved ones were told they should consider taking him off the respirator that was keeping him alive.

The first thing Sam Schmidt uttered after regaining consciousness was an expletive. The second thing was that it was time for a new doctor.

So when he broke the news he was planning to spend the following weekend racing to the clouds during a practice run for the 94th running of the Pikes Peak International Hill Climb — and that from Colorado Springs, he would be going directly to Texas Motor Speedway via private airplane to watch his IndyCar team run — he suggested I come along for the (very fast) ride.

The plane leaves the Quail Air Center at 12:30 on Thursday, he said.

So this is how Roger Penske does it.

The next afternoon, Sam Schmidt races to the clouds at Pikes Peak by using his eyes and sensors attached to his cap while blowing through a tube in a specially equipped Corvette. He uses racecar driver skill and savvy, too.

After the toasts and celebrations, we get a late start to Texas Motor Speedway. Looks like we’re gonna miss IndyCar qualifying, Sam says.

On descent into flat and humid Fort Worth, he nods toward the window. There’s Texas Motor Speedway. Like everything else in the Dallas Metroplex, it looms large. And there’s Big Hoss TV, the world’s largest video board, looming even larger over the backstretch.

We can see an Indy car speeding around the track from the window of the LR-45. Thanks to Big Hoss TV, Sam Schmidt won’t have to miss qualifying after all.

It takes us all of five seconds to pick up our credentials.

The Big Hosses in media relations at Texas Motor Speedway really have their act together. One of them is Gregg Elkin, a former UNLV football information director.

We make our way to the Schmidt-Peterson Motorsports transporters and enclave, where we’re told James Hinchcliffe and Mikhail Aleshin, Sam’s drivers, will start Saturday night’s race from the 10th and 16th positions.

I’m told by Judy Schmidt, Sam’s mother, that I’ve lost weight; that she really liked the column I wrote about Hinchcliffe putting her son’s car on the pole position for the 100th running of the Indy 500; that she didn’t care too much for the one I wrote after the race.

Judy Schmidt and Marv Schmidt, Sam’s father who also is confined to a wheelchair because of a racing accident, are just as delightful as Sam and his immediate family. The Andrettis or the Unsers might be the fastest families in IndyCar racing, but the Schmidts are the most hospitable, and it’s not even close.

At the track, it’s nearly impossible to keep up with Sam Schmidt. He has myriad things to do, myriad people to see. Foundation people. Racing drivers. Chief mechanics. Regular mechanics. Sponsors. Potential sponsors.

At the track, it seems his wheelchair is stuck in fifth gear.

It’s going on 9 p.m., and the NASCAR trucks now are speeding around the track and up on Big Hoss TV, and Sam Schmidt has been at it since 2 a.m. in Colorado Springs. The beds at the Holiday Inn Express across the way from the speedway are going to be a welcome sight.

But Sam Schmidt tells his wife, Sheila, that she has to drive him to the infield first. Some foundation people are boiling Louisiana crawfish and Sam told them he’d stop by.

The crawfish are scrumptious.

On Saturday, it will rain so hard at Texas Motor Speedway — the Big Hosses there mostly referred to it as a steady drizzle — that water from the saturated ground will come up through the track.

It’s not safe to race.

There will be no race. Everybody is told to come back Sunday.

The Schmidt family will not be back Sunday. Absolutely not, Sheila tells Sam. They and the kids are leaving Las Vegas at 8 a.m. Monday on a Hawaiian vacation. The Big Island. Sheila says she’ll need Sunday to pack.

En route to the executive air terminal, Sam Schmidt tells his wife to put her foot into it, like James Hinchcliffe. That we have to beat his rivals Penske and Chip Ganassi to the airstrip.

See those planes with the identifying numbers 500 on their tails? The really sleek-looking ones? Those belong to Penske and Ganassi. We have to beat them.

She says she can’t wait to sleep in her own bed.

Sheila Schmidt asks a reporter if he’ll drive the van back to the terminal while stuff and Sam are being loaded onto the plane for the 90-minute return flight to the Quail Air Center.

Just leave the keys in the gas cap, she says.

When the gas cap clicks shut, I am suddenly caught in the headlights of a long luxury sedan. The passenger door swings open.

You can hear the revving engines of the LR-45 when Roger Penske steps out.