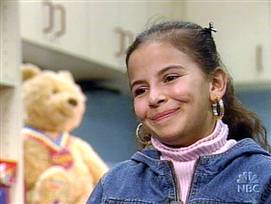 13-year-old girl is victim of a wayward U.S. mortar

If there is one true thing about war, it is that even the innocent suffer. And so it was for 13-year-old Ma’rwa Ahteemi last November.

“I know there was fear. I know that there was a lot of hurt and a lot of pain. I could read that in her,” said Maj. Mary Adams Challenger.

Challenger can’t forget seeing the girl for the first time. An Army Physical Therapist working in a combat support hospital, she never imagined treating a child.

But Ma’rwa had suffered a severe spinal cord injury — the result of a U.S.-fired mortar that fell short, hitting her home. Five members of her family died, leaving Ma’rwa sad, withdrawn and paralyzed.

Challenger, as a physical therapist, had one great fear: “That we would fail her. That this young girl would go home and essentially spend the rest of her life tucked away inside of her home and not be able to interact with the community and not be able to get out in life and have a full life. That was my greatest fear.”

Ma’rwa needed more. So Challenger recruited a woman she’d never met to help, National Guard Maj. Sharnell Hoffer, a pediatrician. “I knew from the moment I met her that she didn’t belong in a U.S. combat hospital,” said Hoffer.

There was an instant bond with the girl, both women say. It wasn’t professional. It was personal.

Incredibly, they did succeed.

With help from the National Spinal Cord Association, Ma’rwa is now at the National Rehabilitation Hospital in Washington, where she is capturing the heart of everyone we met.

“They are very nice to me. I just love all of them,” Ma’rwa said through an interpreter.

Slowly, Ma’rwa is taking her first, limited steps. This bright, determined girl is getting the kind of therapy almost no one back home can get. But she will soon return to a country that is ill-equipped to meet her needs. And she won’t be alone.

“There are so many others. I don’t know the numbers. Hundreds — I would assume thousands — that require these types of services that aren’t available,” Challenger said.

And that is perhaps the most poignant thing of all — that this story of one girl’s struggle to rebuild herself so accurately sums up the needs of her people, one year after war began.
NOTE:
A special fund has been created to assist in Ma’rwa Ahteemi’s rehabilitation efforts:

We All Have Disabilities, You Can Just See Mine!