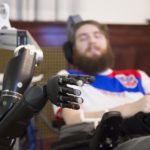 This could be the most touchy-feely robotic limb yet. For the first time, brain stimulation has made it possible for a paralysed person to experience the sensation of touch via a bionic hand.

Robert Gaunt at the Center for the Neural Basis of Cognition in Pittsburgh, Pennsylvania, and his team achieved this by implanting electrodes in the brain of Nathan Copeland, a 28-year-old quadriplegic.

These were inserted into the region of the brain that registers touch from the hand, and linked to a robotic hand in the same room via a computer. When this robotic hand was touched, it triggered stimulation of Copeland’s brain. “He feels these sensations coming from his own paralysed hand,” says Gaunt.

When blindfolded, Copeland could correctly tell which of the robotic hand’s fingers Gaunt was touching 80 per cent of the time.

This is the first time someone has had electrodes implanted in their somatosensory cortex, the part of the brain that registers touch. Previous work has focused on the motor cortex instead, enabling paralysed people to make bionic arms move using their thoughts – for example, to drink a cup of coffee.

Towards a better grip

“The procedure evoked almost natural sensations at some very precise locations in the hand,” says Takafumi Yanagisawa, at Osaka University in Japan, who has used brain-computer interfaces to enable paralysed people to move objects using a prosthetic hand. “The sensory information should be beneficial for patients to manipulate something with the hand more precisely,” he says.

Gaunt now hopes to combine thought-controlled movement with an artificial sense of touch. The ability to feel objects is a vital component of being able to grip and manipulate them smoothly. “If you make the fingertips numb, people become very clumsy,” says Gaunt.

Copeland already has a set of electrodes in his motor cortex that enable him to move objects, so the stage is now set for Gaunt’s team to try linking this to the feeling of touch. But one obstacle is that Copeland did not sense any feeling in his thumb or fingertips – both of which are key for gripping. Gaunt says this is due to the position of the electrode arrays, which they now know were implanted in an area corresponding to the base of Copeland’s fingers, not their tips.

However Gaunt is still hopeful that this new feeling of touch will help Copeland grip objects using prosthetic hands. It’s possible that neurons in his brain that correspond to his fingertips might be able to move or extend to where the electrodes are.

Read more: Brain implant allows paralysed man to sip a beer at his own pace