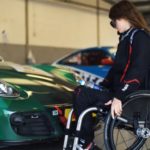 “Life after spinal injury doesn’t have to be any worse, it just has to be different.”

Sometimes you do something just because someone tells you not to.

That was the case for Nathalie McGloin, the only paralyzed female racing driver in the UK.

McGloin suffered a spinal cord injury in a car crash when she was a teenager, which has rendered her paralyzed from the chest down.

Following her incident, McGloin one day found herself car shopping at a Porsche dealership when she spotted a 911. After being advised that she should not purchase a 911 or even think about going sports car racing, McGloin decided to do both.

She now competes in a modified Porsche Cayman S in Britain’s Porsche Club Championship, in which she uses hand controls in order to compete on track against other drivers. Additionally, McGloin has set up a non-profit organization called Spinal Track, which aims to teach others in how to compete on the racetrack with hand controls.

Watch the video below for her full story: