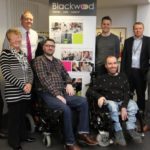 Digital glasses which assist people who don’t have the use of their arms have been named the best new product at a prestigious awards ceremony.

GlassOuses, which use Bluetooth to connect to computers, phones and televisions, won the prize at the Blackwood Design Awards. The glasses were the brainchild of Mehmet Turker, who is based in Hong Kong.

Judges from across Scottish industries opted to give the top prize to the glasses in a category which also included a brace for people who have a weakness in the knee or an injury that impairs their ability to stand or walk independently.

The awards aim to discover, and champion, new and innovative ideas which aim to improve standards of living for those with physical or mental disabilities.

Colin Foskett, head of innovation at Blackwood, said: “We have been amazed by the quality and quantity of entries from 12 countries across the world.

“This is the first time we have done a best new product category – in the past it has all been conceptual, but we wanted to recognise there are some really good products out there.

“From a design point of view, it was difficult when looking through entries to decide a shortlist.”

A MEBot – a Mobility Enhancement Robotic Wheelchair – was also named best new concept on Friday at Dundee Contemporary Arts. It was designed by Dr Rory Cooper of Pittsburgh, USA.

The winning entry received £2,000 from sponsor Kingdom Gas, and backing from Blackwood to make their creative design into a working reality.

The international competition has attracted huge numbers of entries from across the world.

Last year’s winner, Grant Douglas, said the award had helped boost his S’up Spoon product – an unspillable spoon to aid those with shaky hands as a result of cerebral palsy and Parkinson’s.

He said: “We entered Blackwood’s design awards last year as we share its aim to enable disabled people to live as independently as possible through designing accessible products in a way that is pleasing to the eye.

“Over the past nine months, the S’up Spoon has been featured on BBC One’s Songs of Praise. We’ve also donated 10 spoons to a voluntary organisation that helps disabled people in South Africa and it now has packaging so it can be sold in shops and is currently on sale via Amazon.

“Having won the competition, it is fantastic to know that our product is now revolutionising mealtimes for people around the world and we wish all those shortlisted this year the very best of luck. Take it from us – it truly is an incredible opportunity.”

Edinburgh-based charity, Blackwood, has properties in the city to help those who are disabled, elderly or with sensory impairments to live more independently.

Blackwood is also known for technology which allows property adaptations which make a huge difference to people with disabilities.

Event gets the wheels turning