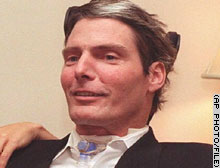 LONDON, England — British surgeons hope a new procedure using stem cells from the lining of the nose will help mend severed nerves of paralyzed patients and may one day allow them to walk again.

Neuroscientist Geoffrey Raisman discovered 20 years ago that the cells responsible for sense of smell are good at renewing themselves.

When these cells were injected into the spines of rats they appeared to help cure damage to the nervous system.

Now Raisman hopes to transfer that technology to humans, working with patients in clinical trials at the National Hospital for Neurology and Neurosurgery in London early next year.

Raisman, who heads the spinal repair unit at University College London (UCL) will perform the procedure on 10 patients. All have suffered a type of injury most often seen in motorcycle accidents where nerves in the arm are pulled out of the spinal cord.

Since the cells come from the patients themselves, there is no risk of them being rejected by the immune system.

The procedure involves taking stem cells from the lining of the nose and using them to create a “bridge” between the severed ends of the nerves.

Raisman said that until now it had not been possible to repair the major nerves running through the spinal cord or branching off from it.

“The injury occurs when a blow to the shoulder pulls nerve fibres out of the spinal cord — it’s like pulling a plug out of a socket. We’re trying to make the nerve fibres grow back in,” Britain’s Press Association reported him as saying.

“It’s never been done before. If successful it will open the door to treating all kinds of connective nerve fibre conditions, including spinal injuries, the most severe kinds of stroke, and blindness and deafness caused by nerve fibre injury.”

Raisman said the success of the first trial is crucial because harvesting stem cells is such a difficult task.

At present only small numbers can be retrieved, limiting the kinds of injury that can be treated. The new trial is seen as a first step to demonstrating that the technique works in humans.

“If it succeeds it will show that these cells are effective at restoring nerve fibre connections,” PA reported Raisman as saying.

“We don’t know what’s going to happen, but we hope to reverse the effects of the injury and give these patients back the use of their arms.”

Raisman was one of the first neuroscientists whose work in stem cell research raised the real possibility that spinal cord injuries, long considered incurable, could be repaired.

If successful, the procedure could also help restore sight to the blind

Spinal cord injuries are caused by disconnection of the nerve fibres — resulting in numbness, pain, and partial loss of movement — which never heals.

In severe cases, severing the Spinal nerves can lead to permanent paralysis, as happened to “Superman” star Christopher Reeve who was injured in a riding accident in 1995.

Reeve, who died last year aged 52, campaigned for the kind of stem cell research that has led to the pioneering trial taking place in London.

Raisman discussed his research Thursday at a conference on spinal injuries at the Royal College of Physicians in London.