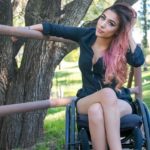 Rarely are the phrases ‘beauty tutorial’ and ‘inspirational tour de force’ used in the same sentence, though the vlogger Steph Aiello may be a unique exception. Left paralyzed from the waist down and with limited use of her hands and wrists after a car accident, Aiello has found a renewed sense of purpose through her passion for makeup and vlogging — and she’s building a burgeoning social presence in the process.

Aiello, now 26, fell asleep at the wheel and crashed into the desert back in 2010 on a car trip from Las Vegas to California, the Daily Mail reports. A friend riding with her at the time did not survive the accident. Aiello, who was supposed to begin cosmetology school the very next day, spent months in the hospital in recovery. However, after she was granted a temporary leave from the hospital that Christmas, she and her parents got into another car accident on the way to a family celebration, when a drunk driver ran a light. Aiello’s mother required several surgeries, and her father suffered a concussion.

Re-traumatized, Aiello returned to the hospital and rehab, according to the Daily Mail. However, her passion for makeup turned out to be her salvation of sorts. Together with an occupational therapist, Aiello taught herself how to open makeup components with her mouth, manipulate brushes between her palms and fingers, and apply products with a staggering finesse.

Aiello, who is also a cancer survivor, started posting makeup videos on her YouTube channel two years ago, and today has amassed roughly 7,500 subscribers — as well as 92,000 Instagram followers. Initially, she withheld her disability on Instagram, where followers flocked to appreciate her makeup skills, though she eventually revealed the truth. As a licensed makeup artist, Aiello also utilizes special brushes that wrap around her fingers to apply makeup to clients.

Earlier this year, Red Bull, which operates a thriving Media House, took note of Aiello’s talents and perseverance, and tapped her as an ambassador for its Wings For Life non-profit spinal cord research foundation. Founded in 2004, Wings For Life now hosts a three-year-old annual World Run to raise money for this cause.

In order to get the word out about the charity race, Aiello collaborated with professional surfer and Red Bull athlete Carissa Moore on a wedding day makeup tutorial. Check it out above.