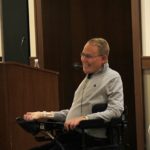 On Oct. 20, 1995, 11 seconds into his college hockey career, Travis Roy found himself face down on the ice at Boston University’s Walter Brown Arena, unable to feel his limbs. On Tuesday, he came to Boston College and talked about that moment and how he rebuilt his life afterward.

The motivational speaker and founder of The Travis Roy Foundation, invited to campus by the Emerging Leaders Program (ELP) and the Undergraduate Government of BC’s Council for Students with Disabilities, hoped to inspire the students that filled the Heights Room to face adversity with a new mindset.

Growing up in Maine, Roy had his heart set on hockey since the first day he grabbed the bag of pucks from the closet next to the kitchen and headed to the local rink with his father.

He found himself setting small goals to reach one of his biggest dreams, from determining how many goals and assists he was going to get as a freshman in high school to studying how to get above 1000 on his two-part SAT to play hockey at a Division I college.

Roy’s hard work paid off, getting him recruited to play D1 hockey at BU. He played the first game of the season against the University of North Dakota.

As Roy went on the ice for his first college game and attempted to check a player on the opposing team, the highly-touted prospect slammed his head against the boards with incredible force.

“As I found myself laying on the ice that day, the truth is I knew almost immediately,” Roy said. “I knew when I saw my warm breath starting to melt a puddle in the ice. I knew when I saw a hockey glove coming toward me and I realized it was mine, that they had moved my arm when the doctor came and I couldn’t feel it.”

He cracked his fourth and fifth vertebra on the ice, leaving his first collegiate hockey game as a quadriplegic.

But even in this moment, Roy had accomplished his ultimate dream. As his father ran down to the ice to check in on his son, Roy told him that from the pain in his neck he could tell his injuries were serious. “But Dad,” Roy said while facedown on the ice, “I made it.”

Confined to a hospital bed for over four months, Roy had nothing to look up to but the white ceiling tiles of the bare room, filled with nothing but his family’s tears and his own heartbreak upon realization that his life’s dream came to an end only 11 seconds after it began.

He remembered questioning in that moment if this would be the rest of his life.

When his family transferred him to a clinic in Georgia that specialized in spinal injuries, Roy slowly began to make his mental and physical recovery. He began to communicate by methods other than blinking, sat in his first wheelchair, and slowly broke out of his depression.

Roy pointed out that sometimes a change of scenery is just what it takes to achieve a change in perspective, referring to the new ceiling tiles above his head with butterflies painted across them.

Looking at the patients around him who lacked familial support and likely would never get the chance to leave their beds, Roy realized that his situation could have been worse.

He had been on the receiving end of an incredible outpouring of kindness from people all over the country, which he credited for helping him heal mentally.

“There was even a little boy who broke open his piggy bank, and he donated $7.23,” Roy said.

Every single individual, and every single donation received, contributed to the rebuilding of his faith in others, himself, and his future.

Roy emphasized to students that if they think their small action will not make a difference in another’s life, they are wrong. He told those present to be compassionate in their actions with others, especially those with disabilities, and to inspire kindness in the lives of people around them.

He also shared with the students his belief that you may choose some of the challenges in your life, but other challenges will choose you. While he chose the challenges hockey provided him with, his injury was the challenge that chose him.

Although the goals Roy set for himself during these two very different stages of his life were not similar on the surface level, the methods he used to achieve them and the fulfillment they brought him are the same.

Whether his goal is to reach a certain number of goals a season, to play collegiate hockey, to lift his arm high enough to feed himself without assistance, to swim, to gain independence, to raise money for his foundation that can make a difference, Roy characterized two motivating factors that are crucial to success: you have to have a strong desire to see how good you can be at whatever it is you choose, and you have to get pride out of achieving it.

The six-week undertaking of building up enough bicep strength to reach a bagel to his mouth was just as challenging, and as fulfilling, as any of the goals Roy pursued on the rink.

Roy advised students to take these same approaches to goals they set and to incorporate passion every step of the way.

As he began to close out his speech, Roy pointed out that what one possesses or lacks does not determine the happiness in his or her life. While there are people who can do what he cannot do physically, things that he could waste his time envying, Roy stated that he would not trade his current situation for an unhappy life with more physical independence.

“I can’t do the physical things I used to, but I can still laugh, I can still cry. And you tell me, what’s more important than that?” he said, emphasizing perspective. “A positive attitude will take you farther in life than anything else.”

Prevention of Urinary Tract Infection in Persons with SCI