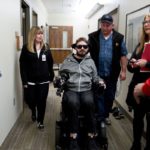 It took a week for them to discover Marshall Burningham was wearing contacts.

The 30-year-old man has worn contacts or glasses most of his life. But after a November fall left him a quadriplegic, glasses were his only option as Marshall moved from Salt Lake City to Lake Shore to live with his parents, Kim and Cindy, as he navigates through his new world.

“The idea of other people putting contacts on me freaked me out,” Marshall said.

Life with glasses isn’t easy. His parents put his glasses on Marshall’s face in the morning and he can adjust his slippery, plastic-framed glasses by himself every hour or so by maneuvering his head in his wheelchair. Three or four times a day, someone needs to adjust his glasses for him. If he’s in a car that goes over a bump, they need to be adjusted again, and if he’s on his family’s property and his glasses fall off, Marshall has to call for help.

It’s the small things that lead to increased independence and quality of life improvements for him, which is why a free PRK surgery that will improve his vision over the next few weeks is changing his life by eliminating constant glasses adjustments. 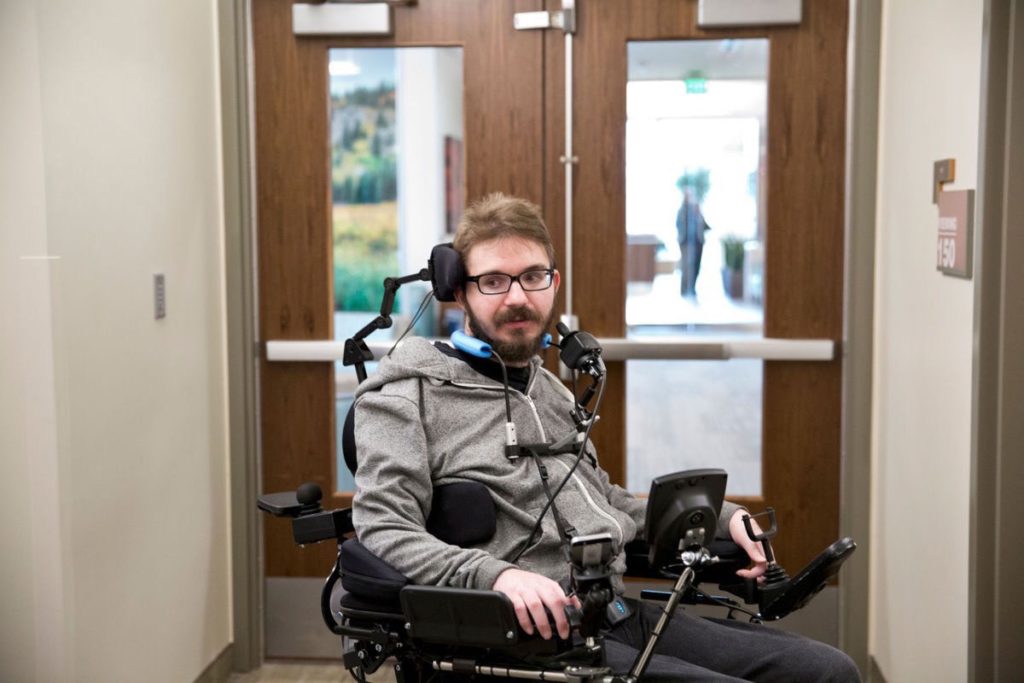 “It’s something I don’t have to worry about, them falling off,” said Marshall, who is nearsighted. “It was really bad. If they fell off, I couldn’t see anything. I would be pretty useless.”

He received the free surgery as part of Operation Sight: Independent Vision, a program that has funding to provide eye procedures like PRK and Lasik to five patients who have hand and arm limitations. The program is part of a collaboration with the Spinal Cord Injury and Rehabilitation Center at the University of Utah. Marshall received the surgery April 28 at the John A. Moran Eye Center in Midvale.

Marshall is the first official patient to receive the surgery as part of the program.

It was a quick procedure that Marshall underwent while Kim watched from a viewing room.

“They threw the eyedrops in, and it looks like it’s blurry, underwater stuff,” Marshall said. 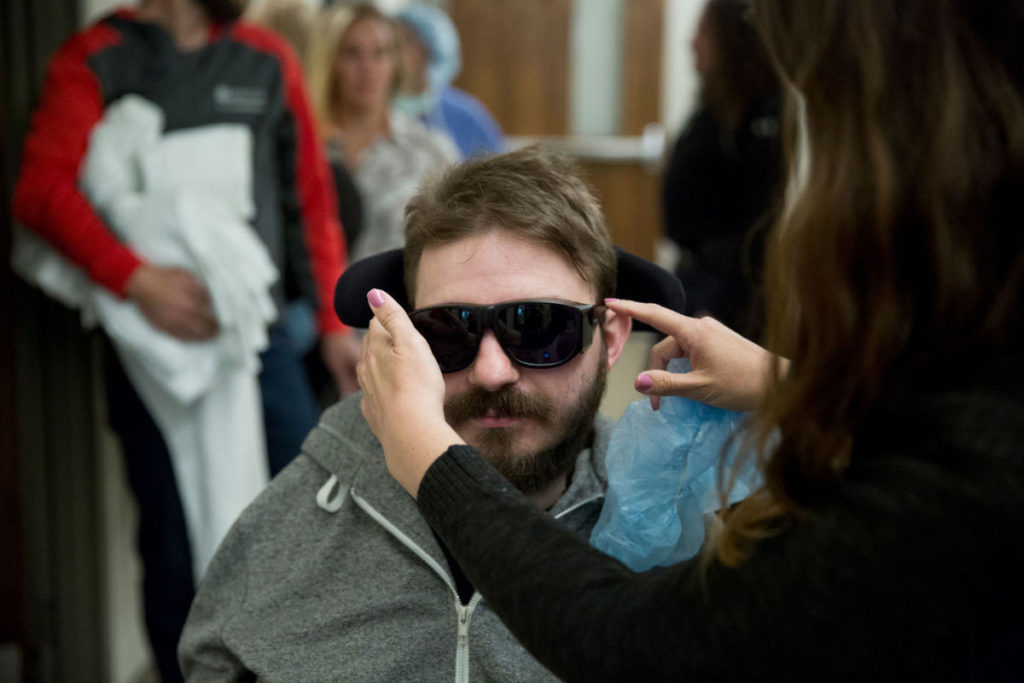 With his accident happening the day before Election Day in November, Marshall woke up to a completely different world — in more ways than one.

“The last thing I remember, Hillary was guaranteed to win, and I wake up and Trump is president,” Marshall said.

With tubes down his throat and plenty of medications in his system, he thought people were lying to him at first.

They don’t know what happened during the accident, only that Marshall fell from the stairs in his apartment building. Marshall lived on the fifth floor of his building and was carrying food at the time. The stairs were in a square-shaped pattern going up, and he was found at the bottom. They don’t know how far he fell, and Marshall doesn’t remember it.

“We think he lost his balance and leaned up against the railing,” Cindy, Marshall’s mother, said.

Marshall was unidentified for a couple of days after the accident because he didn’t have any identification on him after he fell. It wasn’t until someone at the hospital happened to recognize him that they learned who he was.

Marshall went from being a bartender and an IT consultant to being told he may never be able to breathe or eat on his own.

The time spent since has been about adjusting to a new normal and gaining as much independence as possible.

Marshall’s living with his parents on their little farm that includes 40 alpacas, chickens, peacocks and a turtle. There’s a lot of work to do, and a lot of money to spend, as the Burninghams remodel their home to make it accessible for Marshall.

They’ve done a few things so far, like cutting out doorframes so Marshall’s wheelchair can fit through. There’s just a curtain covering his door for now, but they hope to build a door Marshall can open and close on his own.

Since Marshall left rehab in March, he’s gotten help from his tech friends to set up things like a fan and lights he can control using voice controls. He can also use his voice to change his TV to certain channels. His wheelchair has Bluetooth built in, and he can use voice controls to use a phone.

He even has a device that’s like a pair of glasses to use as a computer mouse. He can bite down on a button to click a mouse, and the device tracks where his eyes go to move it.

Next up, he wants a pair of blinds in his room he can open and close using voice controls.

Physically, he’s working toward getting movement back. He can drive his wheelchair with one hand and might get a magnetic glove that will snap to his wheelchair so he can control it.

At first, Marshall wasn’t able to move anything. Then, his therapist discovered Marshall’s bicep was starting to work.

For now, it’s those small victories that are making big changes in his life, like not being able to wear glasses. It’s still a few weeks before his vision will be completely improved, but for now, it’s ahead of schedule. 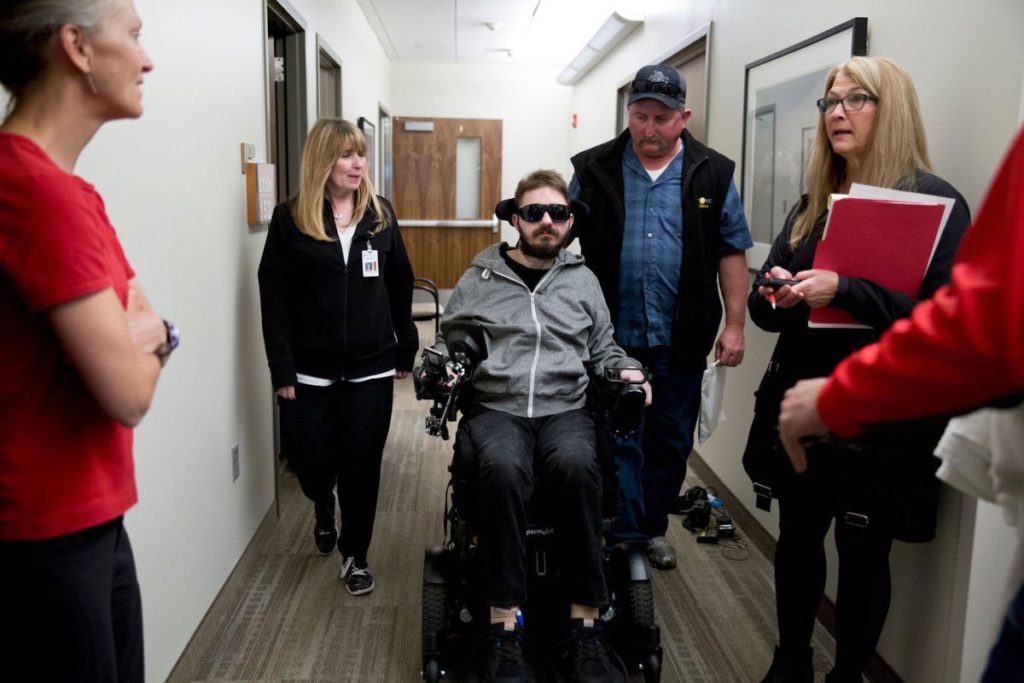 “It’s one less thing we have to worry about,” said Kim, Marshall’s father.

Facebook
Twitter
Email
Mix
Digg
Previous articleSpinal Cord Injury Research: Mayo Clinic Radio
Next articleStunning photographs show an abseiling instructor mother plunging off a cliff in her wheelchair with her eight-year-old son for the first time since becoming a quadriplegic