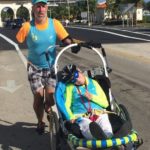 Hector Picard and Kerry Gruson were each in their mid-20s when devastating events permanently changed their lives.

As a young reporter heading to Vietnam to cover the war in 1974, Gruson was interviewing a veteran Green Beret who had a flashback, mistook her for a Viet Cong and strangled her, leaving her quadriplegic and neurologically disabled.

Two decades later, Picard, an electrician, received 13,000 volts of electricity from a substation transformer, leaving him burned over nearly half his body and requiring the amputation of his entire right arm and half of his left one.

On Wednesday, the two combined forces to achieve something many non-injured people would find daunting: a 50-mile bicycle race through the Florida Keys, with Picard, on a specially fitted bike, pulling Gruson in a specially designed trailer.

It was not their first joint athletic undertaking; in January, the two completed a half-marathon, with Picard pushing Gruson in a racing wheelchair. The pair hope to do a triathlon in the future.

Working as a team helps both get through the grueling races. “When I’m pulling her, I think of us both as athletes,” Picard said. “When we finish it, we finish it together.”

Picard, 51, who lives in Fort Lauderdale, first noticed Gruson, 69, who lives in Miami, after he started racing nine years ago. He kept seeing her at races, a diminutive woman with her head cocked to one side, participating in various events by being pushed or pulled along.

“It just inspired me to see this lady who’s been through so much out there, whether it’s hot, cold, raining, or whatever, and she’s enjoying it — and that’s my approach to life,” he said Tuesday as they prepared for the ride. “We definitely are major head-turners, and for us to do something together will definitely turn a lot of heads.”

That’s what they’re hoping for. Both are involved with organizations that help people overcome barriers. Picard is a founder of DontStopLiving.org, an organization that supports people facing physical or other obstacles, and Gruson is co-founder of Thumbs Up! International, a nonprofit organization that connects people of all ability levels to take on athletic challenges together. She has participated in races with different partners and teams, including an Ironman event in weather so rough that her boat capsized. “She wanted to continue even though she nearly drowned,” Picard noted.

It hasn’t been easy for either of them. “Early on it was, ‘God, why me, I was a good guy, why’d this happen to me?” Picard said. “But I realized I had a 1-year-old daughter and she needed a dad, and that’s what got me going early on. And after that, it just steamrolled into today.”

“I saw my kids struggling with the sport, and I saw other dads helping their kids,” he said. He went on to coach softball for five years.

Gruson also struggled with “despair, yes, and anger” after her attack, she told The Washington Post. She had led a physically and intellectually active life as the daughter of two journalists, traveling internationally and speaking several languages. “I realized my anger was depleting my energy, and I needed that energy to survive.”

She had always been stubborn, she said. And she was always an optimist.

“That’s why I’m still here,” she said in a documentary about her life, speaking softly because her vocal cords were damaged in the attack. “It’s a constant struggle, every day, every minute. … People say, ‘You’ve been such a brave person.’ I haven’t. I just have no choice.”

She underwent extensive rehabilitative therapy and resumed work as a journalist, at the Miami News for two years and at the New York Times for nearly 27. She said she does not bear a grudge against the veteran who hurt her, but considers them both to be war casualties. “You have to deal with your anger,” she said. “If you let it consume you, you’re done for. Then you really are a victim. And I’m not a victim.”

In fact, she said, many of her struggles are not unlike what the able-bodied face. “It’s not about disabled people only; it’s about all of us. Sometimes we set these limitations on ourselves,” she told The Washington Post. “People complain about the bumps on the road. For me, the bumps on the road are what make me feel alive.”

Picard, who is also a motivational speaker, loves the idea that he can be a model for others. At one race, an older man crossed the route to give him a hug. “He said I inspired him to keep going. That’s what inspires me, when strangers come up and say that. I live for that.”

On Wednesday, the weather was hot and they shared the road with semi trucks that passed dangerously close, but they made it in five hours.

“We felt great,” Picard said afterward. “I think we made a decent team.”

All Wheels Up Wants You to be Able to Stay in...