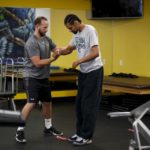 On good days, American high jumper Jamie Nieto can shuffle 130 steps without a cane or walker.

It’s an important distance — about the length from the altar to the church door. His vow: Make it all the way, under his own power, when he’s married on July 22.

The two-time Olympian is recovering from a spinal cord injury he suffered on a misjudged backflip in April 2016. The accident initially left him with no feeling in his hands and feet. Walking? Doctors couldn’t predict if he would take more than a few steps — or any at all.

“People keep saying my recovery is really fast,” said the 40-year-old Nieto, who lives in Los Angeles. “I feel like it’s not fast enough. I want to be better tomorrow. I’m built for speed, not for going slow. But I’m working on being the best walker I can be.”

Nieto proposed to Jamaican hurdler Shevon Stoddart while in a wheelchair, six months after The Backflip. It used to be his signature move after big events.

On April 23, 2016, the maneuver went seriously wrong for the high jumper who once cleared 7 feet, 8 inches to finish fourth at the 2004 Olympics. He was coaching some jumpers when he showed them his backflip expertise. His first attempt was a little off, and he asked for another try.

This time, he pushed off with one foot on the artificial turf and it slipped, forcing him straight back instead of into a somersault. The full weight of his body crashed on his neck.

“I couldn’t really feel anything. I was stuck there. I was like, ‘Oh shoot, I hurt myself pretty bad,’” recalled Nieto. “I had the athletes call 911.”

He was flown to a nearby hospital in Los Angeles and had surgery to fuse a disc in his neck. When he awoke, he could only shrug his shoulders and flex his quadriceps muscles. His hands and feet?

“Nothing,” Nieto said. “But I knew I was going to make a full recovery. There was never a doubt.”

The high jumper who finished sixth at the 2012 London Games spent 12 days in intensive care, two months at an inpatient rehab facility and finally returned home around this time a year ago.

At first, routine tasks were a struggle: Rolling up to get out of bed, brushing his teeth, getting dressed.

He didn’t have insurance, either. So his friends launched a campaign that’s raised more than $80,000.

Just like his days on the track, Nieto is driven as he goes through grinding workouts five days a week. He documents his progress on social media, with one of his posts — lifting weights and pushing a sled — being viewed more than 4,000 times.

“Physically, I wasn’t the most talented athlete, but I worked really hard,” said Nieto, who once demonstrated his leaping ability by high jumping a car. “I had the mental capacity to fight to the end. At that level, it’s what separates good athletes from great athletes.

“I’m still trying to push those boundaries and limits.”

He met Stoddart around 2010 — a story he enjoys telling. They both showed up to audition for a television commercial “to sell TVs,” Nieto said. “I just said, ‘Hi.’”

She got the part.

“Guess I should’ve focused on more than saying, ‘Hi,’” he laughed.

Soon after, they became Facebook friends, and one day he dropped Stoddart a note that they should have dinner after a track meet.

She agreed. An instant connection between the high jumper and the 400-meter hurdler.

“We were talking about getting married before the accident, and when I had the accident it was clear to me, ‘What are we waiting on?’ You never know — you could be gone tomorrow,” Nieto said. “I asked her if she was ready to get married now or wait until I got better.”

She’s been there for him throughout his recovery, feeding him in the hospital when he couldn’t lift his arms, helping him get dressed when his fingers struggled with buttons and transferring him from his wheelchair to the bed when he struggled.

“As I get better and better, she has to do less and less,” Nieto said. “She’s done so much for me.”

In mid-October, they went to a jewelry store to pick up the ring they’d selected. He proposed to her on the spot and in his wheelchair. He promised he would be ready to walk down the aisle by the wedding date.

A few months ago, that didn’t seem likely without assistance. He could only take six shaky steps on his own.

“I keep pushing him forward,” said Stoddart, who was born in Kingston, Jamaica, and moved to Uniondale, New York, as a kid. “After he (walks down the aisle), I’m going to be like, ‘OK, now jog. Now run.’ I continue to push him so he can be the best he can be.”

Before his injury, Nieto wrote screenplays and appeared in movies, such as the film “Baseball’s Last Hero: 21 Clemente Stories” in which he played Pittsburgh Pirates great Roberto Clemente. He continues that work, finishing a script for an episode of the TV show “Family Time” and making a cameo in a soap opera, where he plays the role of a doctor.

Nieto also is 10 chapters into a book about his recovery that he hopes to turn into a film. He already has the leading actor picked out — himself.