It’s 4.5 hard miles down the Bright Angel Trail to Indian Garden, not far above the floor of the Grand Canyon, and 4.5 even tougher miles back up to the top.

The trail is so challenging that it’s generally been thought that no paralyzed person would ever make the breathtakingly beautiful but physically demanding trip.

Sarah Service, a 22-year-old Paraplegic from Owen County, made the round trip earlier this month, wheeled down the rugged trail and back in a special cart, pushed and pulled by some family members and hardy volunteers, sponsored by Easter Seals of Kentucky and Cardinal Hill Healthcare Systems.

“Oh, my gosh, it was even more than I thought it would be,” Service gushed this week, back from the canyon in Arizona. “It was beautiful; it was fantastic.”

Now, officials say that Service’s adventure provided the first successful test of an ambitious plan by Easter Seals and Cardinal Hill to open the door for many other people with disabilities to explore the Grand Canyon and other scenic places that traditionally have been accessible only to those who can walk. They’re already planning another Grand Canyon trip next month — aiming to take Service all the way to the canyon floor — and they hope to take a Massachusetts youngster to Africa’s Mount Kilimanjaro in December.

Kerry Gillihan, president and CEO of Cardinal Hill Healthcare said trips for patients are part of an overall goal of assisting and preparing disabled individuals “in returning to a productive life in the real world.”

One of the main movers behind the plan is Jim Ebert, a former Grand Canyon guide and mountaineer hired four years ago to direct the Easter Seals’ Camp KYSOC at Carrollton, which offers programs for children and adults with physical or developmental disabilities.

“When I came to Kentucky I realized that there were a lot of disabled folks who couldn’t visit many of these wonderful places I’d seen,” Ebert said. “So, I focused on ways we allow people with disabilities to go on these trips.”

Soon afterward, Ebert met Sarah Service, who was left paralyzed after a 2002 car crash. Service wanted to see the Grand Canyon, and, with her mother’s OK, agreed to be the passenger for a test trip into the canyon. 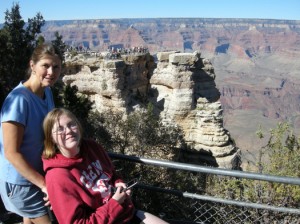 Ebert acquired a special one-wheeled cart, called a TrailRider, in which Service would ride. And he lined up nearly a dozen volunteers from Carrollton, including two ministers, some high school students, a special education teacher and a businessman, to do the heavy work of pushing and pulling the cart. Sarah’s mother, Beverly Service also went along for moral support.

“Sarah was kind of the guinea pig,” Beverly Service said. “But the whole idea was to open things up and encourage other people to try to do this.”

One thing the plan didn’t take into account was of more than 6,000 logs, which officials at the Grand Canyon had placed like stepping stones along the Bright Angel Trail to prevent erosion.

They made the trip even more arduous than expected, because the cart, with Service in it, had to be picked up and carried across each log. The physical demands involved, and the time required, forced the crew to cut short its original plan to take Service all the way to the canyon floor.

Ebert said they had to turn around after reaching a spot called Indian Garden 2 miles above the canyon floor.

“Even so, Sarah is the first disabled person to have ever gotten as far as she did,” he said. “No person who cannot walk has ever been to the bottom of the Grand Canyon. They have gone down the Colorado River by raft. But they can’t go down into the canyon by mule train, because the park rules require that you have to be able to mount the mule by yourself unassisted.”

Ebert plans to have more volunteers and a lighter, easier-to-handle cart for the next trip around Thanksgiving. With any luck, that should allow Sarah Service to become the first disabled person to ever reach the canyon floor by traveling down Bright Angel Trail, he said.