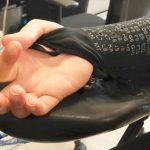 Approximately 5.4 million people are living with paralysis in the United States, with stroke and spinal cord injury the two leading causes. Over the skin, or transcutaneous, neuromuscular electrical stimulation is often used in physical rehabilitation for those with paralysis. However, there are limitations for non-invasive stimulation systems, including not being able to target all muscles, muscle fatigue and inconsistent contraction strength.

To address the current rehabilitative boundaries, a team of researchers, led by Chad Bouton, vice president of advanced engineering and professor in the Institute of Bioelectronic Medicine, partnered with Milad Alizadeh-Meghrazi, director of research and development at Myant Inc. and co-author of the paper. The team developed closed-loop neurostimulation methods and textile-based electrodes using proprietary processes from Myant Inc. to form a light-weight, wearable sleeve that regulates individual finger forces to facilitate functional movement in paralyzed individuals.

“We developed an approach that accurately controls muscle contractions and resulting forces exerted by the fingers,” said Bouton. “This opens up future research possibilities to create portable, rehabilitative devices beyond the laboratory to help those living with paralysis.” Chad Bouton.

Study finds that grasp force can be initiated, regulated

The study consisted of three able-body participants and two participants with quadriplegia. The participants had the sleeve placed on their forearm, and electrical stimulation was applied to the different electrodes to evoke various movements. Finger extension, flexing, and a cylindrical type grasp was observed in each participant, including the ability to squeeze and support a full (750 mL) water bottle.

The results show that through controlled electrical stimulation, along with the use of light-weight textile electrodes, grasp force can be initiated and regulated in quadriplegia. In the future, the methods and technology used could be implemented with an in-brain computer interface to better decode and control hand movements.

“Chad Bouton and his team continue to advance our understanding and application of the science to better help those living with paralysis,” said Kevin J. Tracey, CEO and president of the Feinstein Institutes.

A Paralyzed Florida Surfer Finds His Own ‘Perfect Wave’