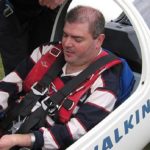 Tonio Mercieca and Christine Borg will be swapping their wheelchairs for a parachute later this month as they tick off parascending from their bucket list.

Parascending and disability are not usually strung in the same sentence, but the two will be proving “it can be done” while raising funds in aid of Dar tal-Providenza.

As of this weekend, they have started looking for corporate and individual sponsorship, while encouraging others to join them on this adventure.

“It all started a couple of weeks ago, when I was having Sunday lunch with my housemates. Through the restaurant’s glass door I saw some paragliders and I told the others that I had always wanted to do the sport. One of my housemates, Tonio Mercieca, said that it was also on his bucket list,” Ms Borg told this newspaper from her sitting room.

The 35-year-old lives in a semi-independent residence in Qawra, run by Dar tal-Providenza. Although parascending has been a lifetime wish, she never tried it out as she feared she would be told it was out-of-bounds for her.

But carer Anna Marshall, who was with Ms Borg during that Sunday lunch, informed her the following day that all was arranged and she could give parascending a go. Together with Mr Mercieca, she decided to turn the September 24 activity at Golden Bay, Għajn Tuffieħa, into a fundraiser.

“I’ve always loved adventure, and the more I’m told that I cannot do something, the more I feel I have to prove them wrong.

“I was discouraged from getting a tattoo. Not only did I get a tattoo, but I also convinced my friends to get one. Skydiving is next on my list after paragliding,” she said, laughing.

Born premature at six months, Ms Borg, who has mild cerebral palsy, has always been a fighter. She sadly lost her twin sister Ritianne a week after their birth.

At times she felt that some of those around her did not have faith in her capabilities, but she has always found her own way to “win over the disability, rather than the other way around”.

She hopes that others in her situation “shed their skin and take the plunge”.

Or, in Mr Mercieca’s words, “fly upwards and onwards”, as they will be doing when parascending.

Mr Mercieca’s love for airplanes has seen him ride a microlight plane in Malta some years ago, and more recently a glider in Scotland. “I cannot describe the feeling of getting off the ground and no longer being wheelchair-bound. The glider had a motto on its side that rings true for me: walking on air.”

When he is up in the air, Mr Mercieca feels free from all the world’s troubles. “I will take any opportunity I get to fly. Some ask me: aren’t you afraid? I actually feel at home, and to be honest, up there I’m already halfway to heaven,” he said.

Mr Mercieca suffered a spinal cord injury during a diving incident in Balluta 40 years ago, when he was just 14.

Initially unable to move at all, he found a lot of support from his family, and is paralysed from the chest downwards with no use of hands but limited used of arms.

Ms Borg looks up to him as a person who focuses on what he can do, rather than his limitations. But it has not always been so plain sailing. 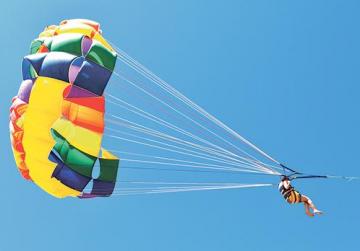 “You cannot forget about all that you could do before, but you have to focus on what you can do now,” he recalled.

Ms Borg said that for some people with a disability, everyday life was a struggle and even getting out of the door was a feat.

“Even the simple task of shopping could be quite an ordeal. After manoeuvring my way around irregularly parked vehicles and get to the shop, I then realise I cannot access the shop with my wheelchair, so I have to ask the shopkeeper for the items I need and wait for them on the pavement or the road,” she noted.

She hopes that when people see her and Mr Mercieca paragliding, they will not see the wheelchair, which will be left on land, but two people on an adventure.

Anyone who would like to sponsor them, or join them for the activity, can get in touch on merciecatonio@gmail.com or christineborg14@gmail.com.