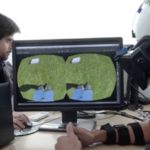 Brain Machine Interface plus Virtual Reality plus Exoskeletons, this is all that it takes to trigger the recovery of patients affected by Spinal Cord injuries.

A recent study published in the journal known as ‘Scientific Reports’ by researchers at Duke University showed 8 patients, completely or partially paralyzed, who regained some of their muscle activity and sensation in the lower limbs. This happened as a result of a rigorous training regimen using non-invasive and mind-controlled exoskeletons and virtual reality (VR) system. Miguel Nicolelis and colleagues developed this system that stimulates patient’s brain activity to take control of its limb movement by triggering the injured portions of the spinal cord to re-engage.

“We couldn’t have predicted this surprising clinical outcome when we began the project,” noted Nicolelis. “What we’re showing in this paper is that patients who used a brain-machine interface for a long period of time experienced improvements in motor behavior, tactile sensations, and visceral functions below the level of the spinal cord injury.”

How did it work? Brain-machine interfaces (BMIs) establish a direct connection between the brain and the computer which enables the patient to control externally attached objects with their mind, exoskeletons in this case. This study spanned across a year, and the research team explored how BMI-based training could affect the ability of the patients to walk using a thought-controlled exoskeleton. Next, they used VR and connected it to the exoskeleton to help paraplegics visualize their bodies and create mind-body awareness. Patients could see the movement of their virtual bodies.

The results were remarkable and quite unexpected. The patients showed dramatic improvement and sensory ability below the area of spinal injuries including crude/ find touch, pain localization, and enhanced voluntary muscle control. This was the first time that any study had shown neurological recovery induced by BMI-based training along with physical activity.

“One previous study has shown that a large percentage of patients who are diagnosed as having complete paraplegia may still have some spinal nerves left intact,” Nicolelis said. “These nerves may go quiet for many years because there is no signal from the cortex to the muscles.” Although only a few of these fibers remain intact Nicolelis says they are “enough to convey signals from the motor cortical area of the brain to the spinal cord.”

After seven months of extensive training, most of the patients showed extraordinary improvement in muscle control and sensation. After 12 months, the improvements were so obvious that the doctors changed their paralysis status from ‘complete’ to ‘partial’. Best case was of a 32-years-old woman who had paraplegia for 13 years, and she could not even stand. In the 13th month of the study, the voluntary movement restored in her leg although it still couldn’t support her weight.

This study has been the first of its kind. The researchers have planned their next move by testing this methodology on patients who have recently received spinal cord injuries. This will determine the efficacy of timely treatment using this BMI-VR-Exoskeleton technology.

At last, some hope for paraplegics! Let us know what do you think about this amazing study and its extraordinary results.