Quadriplegic is living a full life 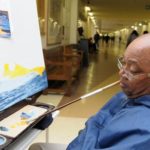 Bungee jumping, paragliding and kite-surfing. Not everyone can do these extreme sports, but these are just a few of the things that Brenton Swartz, a quadriplegic, ticks off his bucket list.

Swartz from Atlantis outside Cape Town was only 15 years old when his life changed forever.

It was an ordinary day and he and his siblings were playing at home when a tragic incident left him paralysed from the neck down. His brother accidentally shot him while they were playing.

Now 44, he remembers the events of that day vividly.

“I was playing when suddenly I heard a heard a gunshot… minutes later I realised that I had been shot. The bullet had severed my spinal cord leaving me with no movement below the chin,” he recalled.

Despite the setback, Swartz is determined not to let his disability hold him back.

Instead, he has turned his life around and used his disability to his advantage, becoming a quadriplegic professional painter; proving that there is life after spinal cord injury.

This month spinal injuries are receiving attention across the globe as Spinal Cord Injury Day falls in September. The aim of the day is to increase awareness about spinal injuries among the general public in order to facilitate an inclusive life for persons with disability and ensure greater chances of success of prevention programmes. It was commemorated on September 5. The global theme this year is ‘Yes we can’.

In a bid to show other people with life-altering disabilities that anything is possible, Swartz spends hours every day doing his painting, perfecting it and making images of it.

Swartz, who currently stays at Durbanville Quadriplegic Centre, where he is cared for by caregivers full time, is one of the patients who are receiving treatment from Groote Schuur Hospital’s Acute Spinal Cord Injury Unit – the only such unit in the Western Cape.

It treats about 200 cases of post-traumatic spinal cord injuries annually.

Dr Johan Sothmann of that unit said 45% of spinal injuries treated in the unit were as a result of car crashes, while 27% were due to violence such as assaults, gunshots and stab wounds.

“Spine injuries can be managed. Patients with such injuries can lead a productive and happy life,” Sothmann said.

While spinal cord injuries usually are devastating, Swartz agrees that not all is lost. And Swartz is definitely not one to lose hope.

He says he spends a large part of his time educating children at schools on disabilities and counsels other people who are either quadriplegic or suffering from other life-changing illnesses.

“When I do go out I realise that many people have questions about our life and how we carry on living. That’s why we end up using our life stories to educate other people.”

As rewarding as it may be to be talking and motivating people, he adds that “spinal cord damage can certainly change the course of your life and may be difficult to accept in the beginning but one needs to move out of the pity party and start using it to their advantage.”

Although it’s been years since the accident happened, details of the fateful day are deeply etched in his memory.

“It was just two months since my mother died, we were all still grieving her death…each one in his or her way. When the bullet hit me it didn’t change my life only but it changed the entire family. It almost felt like a double tragedy.

“That day alone has taught me to forgive unconditionally and carry on living my life and keep dreaming like I did before the accident happened.”

Swartz has been travelling the world, exploring different cultures and lifestyles.

Countries he has visited include the US and Thailand.