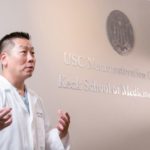 Irvine, Calif., Sept. 13, 2017 — The National Science Foundation has awarded $8 million to a consortium led by the University of California, Irvine to develop a brain-computer interface that can restore walking ability and sensation in individuals with spinal cord injury. This initiative represents the largest NSF award received by faculty researchers in the UCI engineering and medicine schools.

“The goal of this multidisciplinary project is to create an implantable system that by circumventing the damaged portion of the spinal cord can enable patients with these injuries to regain feeling in their legs and walk again,” said principal investigator Payam Heydari, UCI professor of electrical engineering & computer science.

“Spinal cord injuries are devastating and have a profoundly negative impact on independence and quality of life of those affected,” he added. “These resulting disabilities cost the U.S. roughly $50 billion per year in primary and secondary healthcare expenditures, so we hope that our work can solve a major national public health problem.”

The five-year grant, sponsored by the NSF’s Cyber-Physical Systems Frontier program, will be divided among UCI, California Institute of Technology and the University of Southern California. Heydari’s co-principal investigators on the project are Zoran Nenadic, UCI professor of biomedical engineering; An Do, UCI assistant clinical professor of neurology; Richard Andersen, the James G. Boswell Professor of neuroscience at Caltech; and Charles Liu, professor of neurological surgery at Keck School of Medicine of USC.

Nenadic said that the UCI research team has been working in recent years to miniaturize brain-computer-interface systems, shrinking them from the size of a desktop computer to pacemaker scale. Nenadic and Do collaborated previously on a proof-of-concept study to implement a brain-computer interface which enabled a paraplegic man to walk a short distance. The goal of this new NSF-funded project is to perfect the technology and decrease its size.

This new initiative will focus on converting existing technology into a fully implantable version which will implemented in a manner similar to deep brain stimulators. To test the technology, the UCI team will collaborate with Caltech and USC on clinical studies in volunteers with spinal cord injury.

“Since these systems are fully implantable, they will be inconspicuous, work around the clock and access much stronger brain signals, facilitating highly accurate control of movement,” said Nenadic.

Do, an expert in neurorehabilitation, sees potential beyond helping individuals with spinal cord injury. “Once these systems are FDA-approved, their application can be expanded to people affected by disability due to stroke or traumatic brain injury,” he said. “The study also will greatly expand our knowledge of how the human brain controls walking and processes sensation – knowledge that can help researchers better understand disease processes that affect these functions.”

The Cyber-Physical Systems Frontier program is one of the largest within the NSF, providing funding for major efforts that identify and address critical problems which have the potential to be solved through the use of electronic, computing and information technologies.

“People with spinal cord injuries do not have sensation in their legs and must look at their feet when using manually controlled prosthetic legs, since they do not receive normal sensory feedback. This makes it difficult to use devices, such an exoskeleton. However, the brain-machine interface we are working on will be bidirectional. It allows neurons to control an exoskeleton and also gives neurons the feedback of sensation in the region of the brain’s cortex where the leg is represented. The stimulation-based sensory feedback is the main component of our lab’s involvement in the project.” – Richard Andersen, Caltech.

“The present approach develops a technological solution to paralysis by creating a new path for the brain to interact directly with the external environment. This novel approach will synergize with parallel strategies such as neural repair and optimization.” – Charles Liu, USC.

About the University of California, Irvine: Founded in 1965, UCI is the youngest member of the prestigious Association of American Universities. The campus has produced three Nobel laureates and is known for its academic achievement, premier research, innovation and anteater mascot. Led by Chancellor Howard Gillman, UCI has more than 30,000 students and offers 192 degree programs. It’s located in one of the world’s safest and most economically vibrant communities and is Orange County’s second-largest employer, contributing $5 billion annually to the local economy. For more on UCI, visit www.uci.edu.

Media access: Radio programs/stations may, for a fee, use an on-campus ISDN line to interview UCI faculty and experts, subject to availability and university approval. For more UCI news, visit news.uci.edu. Additional resources for journalists may be found at communications.uci.edu/for-journalists.

Spinal education has plenty of backbone