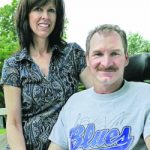 PLUM CITY – It only takes a few minutes of conversation with Gordy Luebker to realize his determination to full recovery from a spinal cord injury.

And one glance at the list of activities supporters and volunteers have lined up for an Aug. 2 benefit on Luebker’s behalf says a lot about how others feel about him and his family.

“Every time I’m out, I have someone stopping me, asking, ‘What can I do to help? What can I donate?’ The response has been just phenomenal,” said Kim Sweeney, a longtime family friend who has been instrumental in the fundraising event.

“It’s a heart-touching experience to see all those who love that family and want to help,” she said. “But, obviously, it’s a difficult experience for Gordy and his family as well.”

Luebker, 48, was injured when a pickup truck he was working on moved and pinned him underneath. Two Vertebrae were crushed. He suffered other injuries, including a serious right arm injury.

Luebker was changing a U-joint on the truck’s drive shaft at the family farm on Nov. 13 when the accident happened. The emergency brake did not work, and the truck’s wheels were not blocked while it inclined.

A physician initially told the family not to be optimistic about Luebker ever walking again, but he now walks at times with the aid of a walker. He has difficulty with his right arm and wrist, but he hopes Rehabilitation will repair most of the problems.

“I’d like to be back to normal in a year,” he said in a recent interview. “You have to stay positive and do as much as you can do.”

Luebker and his wife Cathi have three children; Nicole, 21, Jenna, 18, and Chase, 14. Their rural Plum City home is being renovated to make it handicap accessible. In the meantime, they are living in a house in Plum City.

Luebker admits he has been blessed by the outpouring of support from family, friends and even those the family doesn’t know well.

“I’d like to thank everyone and tell them the appreciation I have for all they’ve done, but there aren’t words to express it,” he said. “So many people have done so much. Thanks doesn’t say enough.”

Cathi, a registered nurse, has been instrumental in dealing with medical issues and helping with Gordy’s rehabilitation.

“I understood everything the doctors were telling me, which, in this situation, was very good,” she said. “He has made a lot of progress, and we are optimistic about the future.”

It’s difficult for Cathi to hold back tears when discussing those who have organized and attended fundraisers, sent cards, prepared meals, helped with chores, donated work time for her to be with Gordy, prayed and assisted the family in countless other ways.

“Just the love and concern is overwhelming,” she said. “I’ve cried over and over in joy about how this community, how our church community and others have helped us. We have been blessed. God has surrounded us with wonderful people.”

Added to the mix is a serious eye infection that required surgeries for Nicole, with the latest surgery on Tuesday.

Events for the fundraiser at the Plum City Legion Park include five St. Croix Valley League baseball games, including the Plum City Blues, beginning at 9 a.m. Gordy has been a pitcher and infielder for the Blues. In honor of his dad, Chase is scheduled to wear his dad’s uniform and throw out the first pitch.

Several teams have chartered buses to bring fans to the games and fundraising event, Sweeney said.

Other highlights of the day’s events include a meat raffle, a live auction after the baseball games, musical entertainment throughout the day, kids games and concessions. There also will be raffles for various items, including preseason Packers tickets, airline tickets, an ATV and $500 in cash.

“There are so many people involved with doing all they can to help this family that it would be impossible to list them all,” Sweeney said. “This family has touched so many others’ lives.

“From the accident to the care and concern people have shown, it should give people the correct perspective on life,” Sweeney added, “that people are the important things in life.”