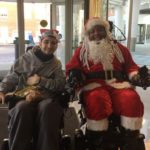 With smiles, laughter, encouraging words and shared experiences, Nichols and LeGrand — who dressed as Santa Claus — demonstrated their unique understanding of the challenges faced by these patients. Nichols, 21, and LeGrand, 27, both paralyzed during sporting events, stopped at the therapy room to check on how a few patients were making out before meeting up with some more patients in the recreation room.

LeGrand had candy canes for the patients while Nichols brought some small toys and games.

“Eric LeGrand is one of my heroes,” Arocho said. “I’ve met him before. I look up to him for inspiration. And today he came as Santa — I wasn’t expecting anything — I was really surprised.”

A member of the Robert Wood Johnson Barnabas Health System, Children’s Specialized Hospital is a provider of inpatient and outpatient care for children from birth to 21 years of age who face chronic illnesses, complex physical disabilities like brain and spinal cord injuries, and/or developmental and behavioral issues like autism and mental health.

LeGrand, a Rutgers University football player, and Nichols, a Monroe Township High School hockey player, met with patients to offer inspiration during their recovery process, which can be long, ongoing and arduous.

On Oct. 16, 2010, LeGrand, a defensive tackle for Rutgers, collided with the ball carrier, Malcolm Brown, on the kickoff to Army. LeGrand suffered a severe spinal cord injury that left him paralyzed. The next day, he managed to say “I’ll be back” to his mother, Karen LeGrand.

Though not back on the football field as a player, the Colonia resident and his determined recovery has been an inspirational journey. He has regained movement in his shoulders and sensation throughout his body and continues to work doggedly on someday walking again. LeGrand has become a motivational speaker as well as sports broadcaster for Rutgers University football games. His jersey #52 was retired by Rutgers in 2013 and LeGrand has been the recipient of many state and national honors and awards.

LeGrand graduated from Rutgers in 2014 with a degree in labor relations and formed “Team LeGrand,” a charity in conjunction with the Christopher and Dana Reeve Foundation, which supports research and quality of life initiatives for people with spinal cord injuries. The 2017 Walk to Believe in June saw 1,200 walkers bring the annual event’s total to more than $108,000 that will go toward finding cures for spinal cord injuries.

Nichols became a quadriplegic after he shattered his C5 vertebrae during a hockey game on Jan. 4, 2014. Nichols, then a senior at Monroe High School, does not recall the first few weeks of his injury; he also suffered a stroke, blood infections and was initially on a ventilator. Doctors also told him he would never move his right arm. He moves both arms today.

Currently, Nichols is taking classes at Middlesex County College in Edison, intending to start a full time schedule next semester and major in communications. He hopes to be “able to talk sports all the time” as his future career. Like LeGrand, Nichols has been involved with raising funds and inspiring other since his injury. Nichols consistently works to fundraise for the Christopher and Dana Reeve Foundation and the Nichols Family Trust.

Both young men have made previous appearances at the hospital. This time, they decided to visit Children’s Specialized as a team, to bring some cheer to the patients as they know all too well how hard it is to be in their respective situations.

“I thought it was important to come out, especially at the holiday time, dress up as Santa Claus and bring to Christmas spirit to take their mind off everything that they are going through,” LeGrand said. “Mikey and I understand what they are going through — the hospital, the rehab — the grind. Somedays are better than others and we want to make this one of their better days.”

Nichols said he was glad to be at Children’s Specialized.

“We’ve been through all this and know what it’s like,” Nichols said. “This is just a little thing that we could do. Maybe taking a little time out of our day makes a big difference in one or two kids days. But really to bring cheer and put a smile on their face at this season — I mean who doesn’t want to be happy. Making people smile, that makes us smile.”

For Jordan’s mother Michelle Ramos, the visit was just what her son needed. Jordan recently underwent a heart transplant and suffered a stroke. He has been hospitalized for four months, the last two at Children’s Specialized.

“It gives him hope — to see them,” Ramos said. “It makes him happy. He is gaining everything back, but there are obstacles every day. He’s been given a second chance at life.”

Kelly Brush- Skiing with a purpose