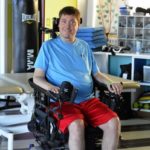 Brian Keefer has always been an adrenaline junkie.

A 2008 gymnastics accident in which Keefer suffered a spinal cord injury that left him a quadriplegic could have stopped him, but it didn’t.

“Brian’s had some adventures since he’s had his injury,” his father said.

From scuba diving in the Aquarium of the Pacific in Long Beach, California, where “sharks swam right into my face,” to ziplining at Roundtop Mountain Resort in Lewisberry, Keefer has had his share.

In 2013, he even had the opportunity to assist in coaching the men’s and women’s Paralympic volleyball teams in Oklahoma, according to an article on simply-home.com.

Next on his list are bungee jumping and skydiving.

“I tell people I would drop my chair out of a plane right now, cause it would be a rush,” he said of skydiving.

Adaptive skydiving options do exist, he said, so for him it’s just a matter of putting the trip together.

Background: Keefer was the subject of many news stories when his Newberry Township home was chosen to be revamped by “Extreme Makeover: Home Edition” in 2011.

Hundreds of volunteers from the community came out to support him, and the makeover team installed many life-changing features to make his living environment more accessible.

He received his own addition to his parents’ house with an open floor plan, voice-activated technology throughout the house to help him turn on lights and electronics independently, a fully furnished therapy room and an indoor pool with a treadmill in it.

Keefer’s injury occurred on July 1, 2008, when he attempted to do a triple flip, according to his “Extreme Makeover” background story. 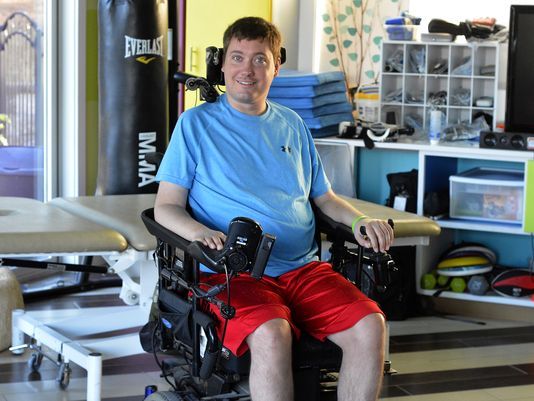 He was 20 years old at the time, attending Lock Haven University in Pennsylvania.

Keefer and his family didn’t know much about spinal cord injuries back then, and after 17 days in the hospital and nine weeks in inpatient rehab, Brian Keefer had to adjust to day-to-day living in a wheelchair.

His dad built ramps for their house, and members of Keefer’s church, Fishing Creek Salem United Methodist Church, brought him meals and built him a bedroom with a bathroom downstairs so he would only have to worry about getting around on one level.

10 years later: Approaching the 10-year anniversary of his accident, Keefer has defied odds with his improvement.

He is now able to sit up on his own and lean forward — a feat he couldn’t accomplish for a couple of years — and last November, he got a joystick on his motorized chair that allows him to drive the chair with his arm.

“Every day there’s been a little bit of improvement,” Keefer said.

His father, Steve Keefer, said he was told that for spinal cord injuries, “after the first year what you got back is all you’re going to get back.”

“And it was a little over eight years (after the accident) when I put a joystick on his chair because he’s getting so much more movement back,” Steve Keefer said. 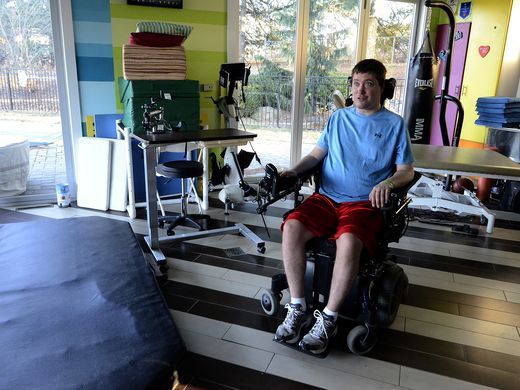 Routine: Brian Keefer’s daily routine consists of waking up at 8 a.m. to get ready for an hour and a half to two hours of therapy. He rides an electrical stimulation bike, gets in a standing frame and sits on a therapy mat. Someone comes in three times a week to help him.

Therapy has helped him continue to gain control over his muscle movements, and his chair allows him to move throughout his addition independently from room to room.

He also has new technology that helps work his muscles.

One of these, the MyoPro, which he got in 2015, is a customized arm sleeve that has sensors on his biceps and triceps. It doesn’t stimulate his movement, he said, but senses when he attempts to make a movement and helps take him through the range of motion.

“It doesn’t help me cheat at all,” he said, because it only works if he is working. It has helped him regain strength and stamina in his left arm.

While using the MyoPro and other equipment that stimulates or detects his muscle movement, he can lift his left arm up and down and back and forth and pedal with his legs at 12 miles per hour.

His VitaGlide machine uses grip-assist gloves to help him pull the machine back and forth, giving him a full body workout, including his back and chest muscles.His next goal is to gain enough strength to feed himself independently, as well as perform daily tasks such as combing his hair, brushing his teeth and shaving. 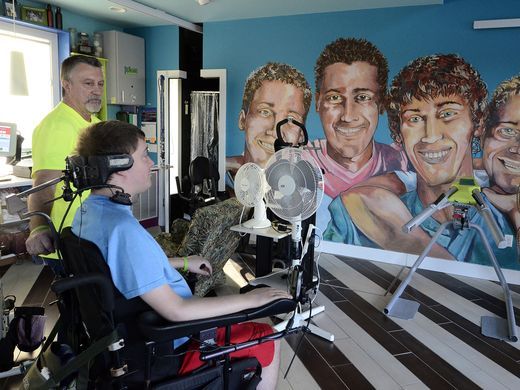 Power of positivity: Part of Brian Keefer’s progress could be attributed to his positive attitude.

“Everybody goes through challenges,” he said, whether it’s an injury, loss of a job or the death of a loved one. “I like to be optimistic and I like to fight my challenges.”

Brian Keefer graduated from Lock Haven with a degree in recreational management and is a certified recreational therapeutic specialist, according to his website.

He knows a 9-to-5 job would interfere with his therapy, which is his “No. 1 priority,” he said, so his focus right now is public speaking.

He shares his story at schools, business associations, religious organizations and medical groups — and most recently the Women’s Network of York in December, his website states.

“If I can reach people and help them in ways like that, that’s the best thing I can do,” he said.

“Doctors won’t tell me whether I will or will not,” he said, “but they like (my) attitude and are optimistic based on recovery so far.”

Strong support: He also owes much to his friends, who he says have supported him from the very beginning.

“I think that’s one of the biggest reasons I’ve been so positive,” Brian Keefer said.

The makeover crew had friends and family write encouraging notes and hang them up in his bedroom. 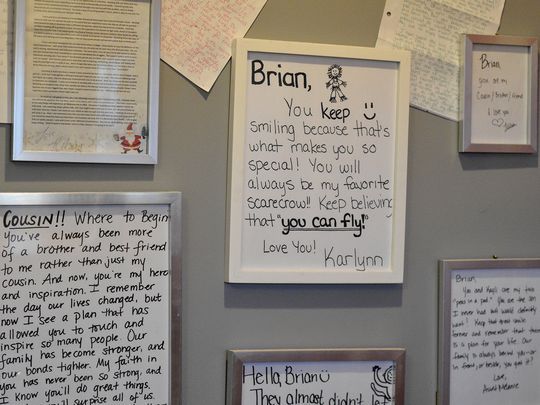 “I have them all memorized, but I still read them every day,” he said.

His friends continue to come over to cook, watch movies, play games or take him out to eat at sports bars.

“They like to motivate me by giving me food as a reward,” he said.

One of his favorite things to eat is steak, and he recalls going to a steak and seafood buffet before the accident:

“I ate over 100 ounces of steak in one sitting,” he said. “I was so proud of myself, but I can move more now than I could that night.”

Nowadays, Brian Keefer can be found goofing off with his friends — maybe even playing the odd game of badminton with a racket taped to his head — listening to The Beatles and traveling with his family.

“I lived out in Oklahoma for six months to work with the Paralympic sitting volleyball team, and that’s when we discovered we (he and his family) like to just drive around,” he said.

“We drove to Oklahoma and got to go see everything,” he said. “While we were down there, we took a week and just drove through Texas and explored everything.”

“It’s just been 10 years of pulling together as a family,” Steve Keefer said. “Brian is the one that keeps us going.”