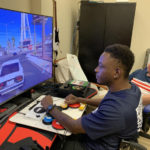 Some VA medical centers have realized that helping vets get back in the game can also help with their recovery.

On a recent afternoon, 26 year-old Mike Monthervil sat in a small room filled with flatscreen TVs, virtual reality headsets, and squishy blue armchairs. He played the latest Need for Speed game on Xbox One.

He was visiting his recreation therapist Jamie Kaplan in his office at the James A. Haley Veterans’ Hospital in Tampa.

Kaplan kicked back in one of the armchairs, but Monthervil was in his wheelchair. The U.S. Army veteran was paralyzed during training exercises in Afghanistan five years ago.

“My spinal cord injury causes me to lack dexterity in my fingers and in my wrists,” he said. “When I learned about that I was like, ‘Ah man, how am I going to hold a controller and game?'”

Fortunately, Kaplan could help. He’s been working with adaptive controllers for years to help patients with limited mobility continue to game. He taught Monthervil how to use them.

Lately they have been playing with the Xbox Adaptive Controllers that Microsoft developed. In partnership with the Department of Veterans Affairs, the company donated the controllers and related gaming equipment to about two dozen VA medical centers earlier this year.

Monthervil is most comfortable using his fists and wrist to push over-sized buttons and steer an attachable joystick, but Kaplan explained the controller is versatile.

“You can configure it using switches, using joysticks in a number of different ways to allow everybody from an amputee, to a stroke patient, to a quadriplegic, to pretty much anybody with a disability the ability to game,” he said.

As Monthervil sped an old-fashioned sports car through the Las Vegas-inspired city on the screen, he joked with Kaplan about the rundown state of the vehicle.

“You could have gotten me a better car!” he teased.

“That’s the one that came up, it wasn’t me – maybe you could earn a better car,” Kaplan shot back.

Monthervil said the banter and trash talk are some of his favorite things about gaming, and Kaplan said they are important to his sessions as well.

“I want them to feel as comfortable and as normal as possible, just like they’re hanging out with their friends or talking to their buddies or family members,” he said.

Kaplan refers to recreation therapy as sneaky therapy, because patients often don’t realize they are working on things like motor and brain function while they’re having fun.

But his ultimate goal is to help veterans reconnect with the activities they love and the people they love doing them with.

“I had a patient, a young 24 year-old, and his brother came in and they were able to game together for the first time in three years,” he said. “He had tears in his eyes and said, ‘I never thought I’d be able to do this again.'”

Monthervil laughed as he recalled a different experience with his brother, who recently challenged him to a game online.

“He was like, “Dude there’s no way that’s you playing on the other end because I was just dominating him,” he said. “When you show them you can kick their butt they’re like amazed at what you can do.”

More Than A Game

Gaming doesn’t just help vets spend time with friends and family. For Marine Corps veteran Dave Crouse, it connected him with a virtual support system when no one else could reach him.

The former bomb squad technician lost his left hand and eye in 2013 and spent two years recovering at Walter Reed National Military Medical Center in Maryland. He said despite the many resources available to him there, he still felt lost at times.

“At 2:30 in the morning, when I’ve woken up, you know, with nightmares, I’m re-examining every decision I ever made – you know I would just get up and I would just stare at a wall,” he said. “And my wife was trying to help me through that but there was only so much she could do, and so what I ended up finding was that in that time, that was where I turned to video games the most,” he said.

Crouse described the modern gaming community, where strangers from around the world can game together and form relationships through chat apps and streaming services like Twitch and Discord.

He works with Stack Up, a gaming charity for veterans and active duty military. The group provides gaming equipment to service members, organizes social events, and even launched a suicide prevention program through its Discord channel.

“I’ve had some very heavy conversations over the playing of video games,” said Crouse. “This amazing thing happens psychologically when you’re just hanging out [with people online], playing video games together. A lot of those barriers go down because now all we’re doing is we’re just shooting digital monsters.”

Microsoft charges $99.99 for the Xbox Adaptive Controller, but that price climbs with various attachments.

Jamie Kaplan said the VA actually considers the controllers adaptive medical equipment and can purchase them for patients if justified.

He said the VA understands it’s not about just playing video games, it’s improving the quality of a veterans life.

This story was produced by the American Homefront Project, a public media collaboration that reports on American military life and veterans. Funding comes from the Corporation for Public Broadcasting.

Oh, to be young and uninsured: Bad idea