“I have a lot of sports to play”, says wheelchair basketball player Kartiki Patel 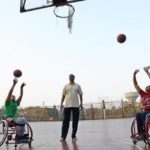 Almost 10 years ago, Kartiki Patel woke up in a hospital bed and couldn’t feel her legs. She was relieved, though, that they were still there.

She had been on a road trip with cousins to Gujarat when, on a turn, the car went off the road, down an eight-foot drop, then somersaulted. “I was sitting in the back, and I got juggled. I thought amputation was the worst that could happen at that point. I thought I could exercise and get back on my feet, and that’s what people kept telling me. But when I finally asked the doctor, he said, ‘Did nobody tell you that you’re never going to walk again?’” Kartiki explains, in a conversational tone, that her spine had been broken and the spinal cord severed. “That was a big blow. I lost heart for some time.”

She had always been enthusiastic about sports, playing basketball in college in Mumbai, even bunking lectures to get in more than eight hours of practice every day. Even when she lost her parents — her mother died when she was in Class XII, her father in her final undergrad year — she had kept playing. “I guess it was me trying to cope with all the time I had, with no one to tell me to study, do things.” She had no idea what she wanted to do after college, and took a year off; then she followed her older sister’s advice and went back to college for an MCA degree. Post-grad degree in hand, she got a job: IT-related back-office work.

A year later, the accident happened. She was 25.

A senior colleague, who lived with multiple sclerosis and spent time helping people who had similar issues, pushed her to return to work. Four months later, she did. “It took my mind off a lot of negative thoughts that kept coming to my head when I was in bed.”

An uncle suggested she take up swimming; sports was far from her mind at the time. But a few years into the job, she started getting bored. “I was happy to be earning and on my feet again, but I was doing the same thing every day. I thought, let me try swimming, and I asked that uncle to teach me. It was a big struggle looking for an [accessible] pool, but I was determined. I went to the one at Goregaon Sport Complex even though the washroom wasn’t accessible, and I managed.” Once she picked it up, her competitive streak took over and she entered competitions and won several medals.

It was at a swimming meet that Kartiki met the chair of the Wheelchair Basketball Federation of India (WBFI), who told her about a national championship in Chennai. Kartiki landed up there, but found that there were no women basketballers yet. She had also tried out wheelchair badminton by then, and in Chennai, she found people she had met while playing the shuttle sport — a group of army veterans from Pune — who encouraged her to take her love for sports further. There were no other women playing basketball at the time, so she began working hard on her badminton and entering tournaments. Soon, she won the nationals three years in a row and represented India in para tournaments abroad, winning a bronze medal in the Spanish Open, but nowhere else. Standards abroad, she says, are much higher than in India, where few women play.

Meanwhile, WBFI was just beginning to get more women on court, and an India team was forming, “So I joined basketball again.” That was last year.

Wheelchair basketball is tougher than playing the game on your feet, she says. “You have to control the ball with your hands, and also move the wheelchair with your hands. When I was standing I just had to think what I wanted to do and I was doing it.” A year in, having the chair do her bidding on court is still a work in progress. “I haven’t found my rhythm as yet. With my action, I can shoot from close, but not yet even from the free-throw line. When you’re standing, it all comes from your knees, right? In a wheelchair, it has to come from your waist, your torso; that fitness is not there yet. I need to get a stronger back and abs.” 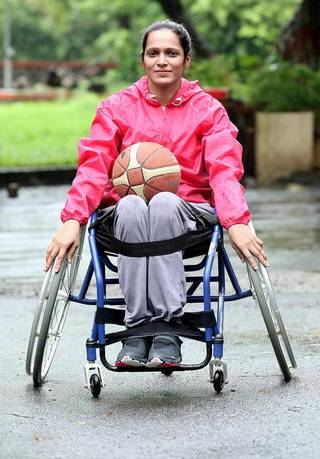 Her spinal cord was severed at a point just under the navel, below which she cannot feel anything or move anything. “Even the torso does not get assistance from below that. If I bend from the wheelchair to pick up the ball, I have to hold something to pull myself back erect. My back can’t do it.” Also, since there is no sensation in the lower half of her body, the little discomforts that cause able-bodied people to make frequent micro-adjustments when they sit do not happen; as a result, Kartiki has been plagued by pressure sores, and each time has meant months of bed-rest to let her body heal.

She quit her job in 2015 to start a Master’s in social entrepreneurship at the Tata Institute of Social Sciences; she has completed one year, but had to take medical time off because of pressure sores, and her faculty has insisted that she repeat the second year, which she isn’t happy about. She has already started a beta of her business idea, though — adaptive fitness classes for paraplegics — but hasn’t got down to registering a company yet.

She has also finished her first set of scuba lessons, with just the open water dives to be done before she gets her certification. Then there’s cycling: she bought herself a tricycle with the intent of joining a Manali–Khardung La ride with other people with disabilities, but says: “I don’t think I can do it right away, I’m thinking of doing a 100 km ride first, then move on to the next level, not doing inclines right away.”

And yes, in December, Kartiki got married. “I met Herman when I first joined work. He liked me, and I liked him as well, but I wasn’t looking for a relationship because people at home were looking for an arranged match for me. After my accident, he took a lot of care of me, he was always with me. That’s when it all started. We’ve been together for almost nine years. I carried a lot of baggage, even before the accident, and there were times I tried to let him go his way — I didn’t want him to later regret being with me — but he was the one who never quit on me. So, we continued. And that’s about it.” She insists she isn’t good enough with words to describe the relationship or Herman, but her bland tone is belied with the hint of a smile that usually sits around her lips broadening until it well-nigh splits her face.

What next? Any plans to start a family? “I’d love to. But I have these commitments, and my husband is changing jobs right now; when we’re a little settled, when I have nothing to do for a few months, that’s when I will think about that. Till then, I have a lot of sports to play. I haven’t written it down; I should write it and tick them off one by one.”

The next checkbox is ready. In early February, she was selected captain of the Indian women’s basketball team for the Asian Para Games qualifiers in Bangkok in March. Then? “The 2020 Paralympics. I plan to go even if I don’t get to participate. I’m taking it one tournament at a time.”