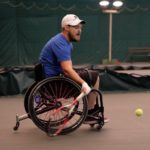 In the course of three years, Taylor Graham has accomplished many things: Survived a motorcycle accident, adjusted to a spinal cord injury and a new life in a wheelchair, picked up the sport of wheelchair tennis, graduated from Southeast Community College, and even got married.

So what could possibly be next?

“We have a goal of competing in the Paralympics in 2020,” said Kevin Heim, his wheelchair tennis coach.

Flashback to Aug. 29, 2013: Graham was riding his motorcycle in south Lincoln. It was early in the evening, and he was making a left turn, and he remembers a van with no brake lights, his motorcycle skidding and his body flying through the air. He called it a “God moment.”

“It was an out-of-body experience, it was weird … time had stopped,” he said.

His body hit the van. He remembers talking to a first responder, even knew her from church (another God moment), and telling her to call his father. He remembers the pain and being strapped onto a gurney. Once the paramedics arrived, things started to fade.

A few days later, he woke up in the Intensive Care Unit at Bryan Medical Center West to discover he was on breathing support and had collapsed lungs. He was told he had a spinal cord injury and would likely be paralyzed.

“I accepted it,” he said simply. “Having those ‘God moments’ helped with my attitude.”

Facing the reality of his future, he learned everything that he could do. While at Madonna Rehabilitation Hospital he met Rick Haith, a recreational therapist who also was in a wheelchair as a result of a car accident.

“I always look for potential in patients,” Haith said. “He reminded me of myself. He had the attitude that he would do anything; bring it on.”

Haith says when individuals become physically disabled in a traumatic way like Graham, they have to overcome physical and emotional hurdles. “Taylor never experienced that,” Haith said. “He’s very fortunate he didn’t go down the dark hole of emotional issues.”

Haith introduced Graham to adaptive sports. Graham enrolled at SCC, where he took a career development course and discovered he wanted to enroll in the Welding Technology program.

Meanwhile, Haith encouraged him to try competitive wheelchair sports like basketball, golf, bowling, and tennis. Initially he didn’t think he could play tennis because it was difficult to grip the racquet, since he doesn’t have full use of his hands. They discovered that athletic tape would be a helpful tool. Every time he plays, he tapes the racquet to his hand. The more he played, the more he became a fan of the sport.

“I loved tennis more than the other things, so I learned as much as I could.” Graham said. “I like it for the social and health benefits, and it gives me something to look forward to.”

Moving up the ladder

He played weekly with others from Madonna at Woods Park. That led to local and national tournaments. Playing recently at the 2016 U.S. Open USTA Wheelchair Championships in St. Louis, he and his partner, Jack Spicer, won the Men’s Wheelchair B Doubles category.

Graham, ranked sixth nationally, has his eye on tournaments in Tucson, Ariz., and Palm Springs, Calif. He plays both doubles and singles, but prefers singles.

Open, for those with permanent impairment to one or both legs, but still have the use of their arms; and

Quad, for those with impairment to both arms and legs. Graham plays in both categories.

He takes private weekly lessons from Kevin Heim, executive director of Woods Tennis Center. Heim accompanied Graham to the U.S. Open in St. Louis. He says Graham is a quick study and has good mobility in his “sport chair,” which is a type of wheelchair created for sports. Heim says working with wheelchair tennis athletes has changed his outlook.

“I used to be the head pro, and I was working a lot of hours and starting to get burned out on the court,” Heim reflected. “It felt like, to me, I was going through the motions.”

Things changed when he started working with wheelchair tennis players. “I see the game in a whole different way, and it makes me appreciate tennis more,” Heim added.

Heim even got in a wheelchair to figure out what kinds of obstacles players face when they’re playing tennis. “It challenges me in different coaching ways,” he said.

The road to Tokyo

Heim and Graham are working toward their goal of the 2020 Paralympics in Tokyo. If they can raise enough money, and if Graham qualifies, nothing will hold them back.

Haith, also a graduate of SCC, remembers when he could beat Graham at tennis. Those days are over, he said. He’s not surprised by Graham’s progress.

“He has all the potential in the world,” Haith said. “He puts in the work and the effort. He can knock down any obstacle in front of him. That’s rare.”

Graham is a 2013 Lincoln Southwest High School graduate who will soon be graduating from SCC with a welding technology degree. He is ranked sixth nationally in wheelchair tennis.