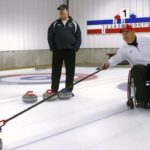 Steve Emt was rolling himself up a hill to a pie shop in Falmouth, Massachusetts, when the coach of a wheelchair curling team noticed the former UConn basketball player.

The shop’s name was Pie in the Sky. An interesting coincidence, Emt thought, when Tony Colacchio approached him and suggested that within a year he could turn Emt into a Paralympic athlete in a sport he’d never heard of.

It took a few years, but next month, Emt will compete in the Paralympic Games in South Korea as the vice skip of the United States curling team.

“The sport just bit me,” he said. “With everything that has happened to me in life, I’ve learned to stop asking why. Everything happens for a reason.”

He was a student at the U.S. Military Academy in when he lost his father, a man he says was his best friend, mentor and coach. His dad’s death, he said, led to falling grades at West Point and a decision to come home to Hebron, Connecticut, where he was a basketball and soccer star in high school.

Jim Calhoun said he learned from his players about this big, tough kid playing intramural games at UConn. Calhoun, who also had lost his father at a young age, gave the 6-foot-4, Emt him a chance to walk on to the Huskies. He played with the likes of Ray Allen, Donyell Marshall and current coach Kevin Ollie from 1992 to 1994.

“Coach Calhoun stepped right in as a father figure,” Emt said. “He became a person I could talk to, a person who demanded the most out of me, showed me what it was to never give up, to give 100 percent every day.”

Emt said he needed those values, instilled by his dad and drilled home by Calhoun to help him survive what came next.

A year removed from UConn, Emt lost his ability to walk when he decided to get into his truck after a night of watching basketball and drinking with friends at a bar in East Hartford. He drove off Interstate 84, flipped five times into a bridge abutment going about 80 mph. He broke most of his ribs and his back, severing his spinal cord.

What followed were surgeries and months of rehab, learning to open a door by himself, put clothes on, make toast.

Calhoun gave him some advice.

“I didn’t want people telling him how tough he had it,” Calhoun said. “I told him, no, you’re not going to play in the NBA, but you weren’t going to do that anyway. So, why not put those good things you do have, your mind, your toughness, into something positive.”

A while later a friend asked Emt to mentor a trouble teen. That gave him some direction. He wanted to work with kids; he wanted to be an example. Emt eventually went back to school, became a math teacher and for 20 years, a high school basketball coach. 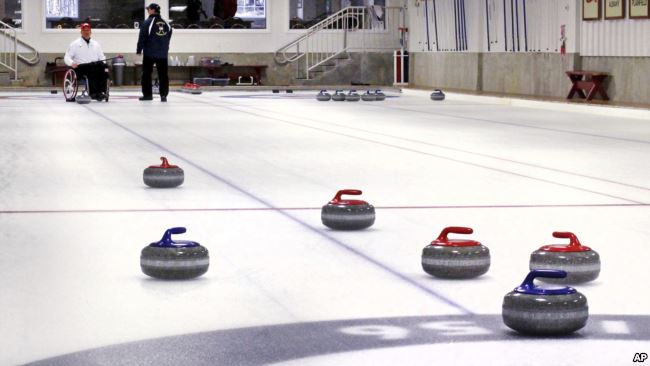 He said he never had the desire to play wheelchair basketball. He has tried several other adaptive sports, even racing a hand cycle in the 2010 New York marathon.

But then in July 2012 he went on vacation to Cape Cod, and decided to get some pie.

About a week after their meeting at the pie shop, Colacchio convinced Emt to come watch an international tournament, called a bonspiel, which was being held on the cape. During that tournament, the coach called to say a Canadian team was missing a player and asked if Emt would be willing to drive from his home in Connecticut to fill in. He’d have to learn the game between midnight and 4 a.m., after the curling tournament had ended for the day.

No problem. The math teacher fell in love with the angles of the game, figuring out how hard to throw the stone down the ice and how much curl was needed to make a shot.

Colacchio said he was immediately impressed by Emt’s dedication. His star pupil now practices about 20 hours a week, either making the five-hour round-trip drive to Cape Cod or two hours to clubs in Norfolk, Connecticut or Bridgeport.

“The day they put that USA jacket on him, he cried,” Colacchio said, choking up himself. “I still get emotional thinking about it.”

Emt’s team leaves this week. They will spend some time in Japan practicing before the games. The curling begins March 10.

“When things don’t always go your way, it takes more than the average person to overcome it,” Calhoun said. “Steve’s always done that. So, I think he can help his teammates, who have all been through similar things, realize, maybe when the times get tougher, ‘Hey, we can do this.’ You know how people ask, ‘Who would you want in your foxhole?’ I would like to have Steve Emt in my foxhole.”

Alternative therapy could be the next step for those with spinal...