Each year in the United States, about 11,000 people suffer a spinal cord injury.

Recent research shows what happens in the first days after an injury has a big impact on how well patients recover.

And a new drug is showing big promise.

“After my operation, they said I wouldn’t be able to walk again,” he said.

In fact, doctors thought he wouldn’t even be able to sit up again. But then he got a drug never before tested on humans.

“We apply the Cethrin to the injured spinal cord directly,” he said.

It blocks the pathway that prevents nerve cells from regenerating. In a study of 37 patients with severe injuries, one-third had a significant recovery. One in five had a major recovery.

“In my own clinical experience, this type of recovery is very unusual,” Fehlings said.

Significant recovery can give patients the ability to grip a jar or get themselves from a chair to a bed. 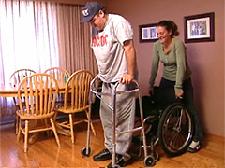 “In some patients, it might even mean that they could recover the ability to walk,” Fehlings said.

Johnathen can pull himself to a standing position. And using a walker, he walks three days a week in rehab.

“Each day, I’m doing a little more, like taking a few more steps,” he said.

He credits more than the drug for his recovery.

“A lot of everything in the world is mind over matter,” he said.

His next goal? To play sled hockey in the Olympics.

Right now, the drug is being studied only in people who have a new spinal cord injury. One of the test sites is Seattle’s Harborview Medical Center.