A cyclist’s uphill battle to get his life back

The attorney lay awake in his hospital room, listening. 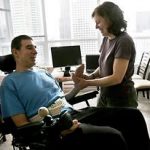 Even now, in the cold November dawn, helicopters landed, sirens wailed and respirators hummed with purpose. Nothing ever stopped at Harborview Medical Center.

And Mickey Gendler had a front-row seat to it all.

As he lay there, he replayed the accident a thousand times. The moment his bike tire caught in the grate. The flip over his handlebars. Later, his wife’s face when they heard the words “spinal-cord injury.”

Gendler watched the clock. It was time for the nurses to turn him in bed, a ritual that happened every two hours, another reminder that his body, all 6 feet 4 inches, had become the domain of others.

But his mind, that he still owned.

If he wanted to walk again, reclaim his life, he needed to focus, strategize and do what 29 years in the courtroom had taught him.

He needed to fight.

Gendler, 56, was not one for patience. Maybe it was his New Yorker DNA, having grown up in the Bronx.

“He who has patience, waits,” he used to say. Gendler once finished the annual Seattle-to-Portland bike ride in a day, when most people do it in two. Taking more time did not occur to him.

Moving fast was part of Gendler’s job as a public-interest litigator in Seattle, battling for environmental causes and civil rights. Fresh out of Georgetown Law School, he helped stop a nuclear power plant from going up on the Skagit River in the late 1970s.

In the 80s, he challenged — and defeated — a state project to construct a highway on the Columbia River from East Wenatchee to the Rocky Reach Dam. He was also a part of the legal team for the Committee for a Two-Newspaper Town, which sought to keep both of Seattle’s daily newspapers alive.

On Oct. 28, a Sunday, Gendler and his friend met in the University District to cycle around the south end of Lake Washington. The weather had cleared up; both were itching to get in a ride.

They turned right from Northeast Pacific Avenue and continued over the Montlake Bridge when Gendler’s front wheel, suddenly, lodged between an inch-and-a-half section of metal grating.

The force sent his bike skyward. Gendler flew over the handlebars and landed on his head. His helmet shattered and his body curled into a fetal position. He couldn’t move.

Doctors said he’d suffered an “incomplete” spinal-cord injury. The accident had damaged his upper Vertebrae, but he maintained some Motor function. This meant recovery was possible — though uncertain. No one knew how far therapy could take him.

During those initial weeks at Harborview, Gendler had no control of his arms, hands and legs. His limbs often felt as cold as concrete and erupted into spasms, a result of nerve trauma to the spine. He discovered his strongest Reflex was his eyelid, which snapped with crocodile ferocity whenever his wife, Nan, tried to insert his contacts.

Nurses helped him bathe, and changed his Catheter and bed pans. Sensation dulled from his neck down. A wet washcloth felt dry and he pleaded with nurses to wring the moisture on his head so he could feel the droplets.

Therapists and doctors rotated through his hospital room; his wife rarely left his side. Gendler realized he needed a small army of people just to make it through the day.

A friend who visited made a sign. “Full recovery is the only option,” it read.

He started thinking: What if that was possible?

On March 1, four months after the accident that left him a quadriplegic, the Center for Environmental Law & Policy named Gendler a “Water Hero” for his work protecting the state’s waterways.

Weeks of therapy have brought back limited movement. He stands with a walker, sits up in bed, and lies down. He walks a few steps if someone steadies him by the waist. Full recovery remains an unknown.

The event to honor him was held at the Bellevue Red Lion, and Gendler wore the attorney’s uniform: dark suit and tie. Nan pushed him to the podium in his wheelchair to accept the award.

Minutes ticked by as he struggled to his feet. Leaning against his walker, he cracked a few jokes and began to speak. But fatigue overcame him.

The old Mickey would have hit this one home. He would have moved easily under the spotlight, commanding attention with his large frame and baritone voice. He would not have missed a beat.

And now he paused.

If you’ll give me a moment, he said.

He sat down and finished his speech from his wheelchair.

It’s about getting there

In early March, Gendler stared down the hallway of the M Street Apartments on First Hill. He and his wife moved here in December, while their Phinney Ridge home underwent renovations to make it wheelchair accessible.

Rehabilitation is Gendler’s full-time job. Therapists arrive five days a week to help him stretch, exercise, and transfer him from bed to wheelchair, and wheelchair to car. Insurance covers the costs for now.

Walking is part of the therapy, and it is rigorous work. Gendler once cycled the Alps and the Pyrenees. But this 11th-floor hallway stretched before him like a vast canyon.

Are you ready? asked Mindi Bohrer, his Physical Therapist.

He leaned his torso into the walker.

I remember riding up the Pyrenees Mountains. The switchbacks were long and steep. But the more you climbed, the more you got into a rhythm.

He pushed his body forward one step. Then two.

You think a lot about the road, about how far you have to go.

He passed apartments 1115, 1114. Sweat dripped from his forehead; his muscles screamed.

Then you look around. And the view is beautiful, so beautiful, you’re afraid of what you missed when you weren’t watching.

When you reach the top, everyone is celebrating. And you realize the most important part of the ride isn’t the summit. It’s getting there.

“You did it!” Bohrer said. “Congratulations. So, is that enough for today?”

A new record, another challenge.

Gendler and his wife moved back into their Phinney Ridge home three weeks ago. He continues his daily therapy and is now learning to take steps, incrementally, without the aid of his walker. He can move his arms up and down but struggles with fine motor skills.

The gap on the Montlake Bridge remains, he says. He’s written to the Washington state Department of Transportation about it and is considering legal action.

In a recent e-mail to colleagues and friends — written via speech-recognition software because he can’t type — Gendler described his latest victory. He made it 114 feet with his walker, then went another 96 feet after resting in his wheelchair. This shattered his apartment-hallway record.

“Obviously, I need to start planning for the Beijing Olympics,” he wrote. “I am thinking I should enter the 100 meter and also the marathon.”

He sees his injury as an adventure — not one he chose to go on, but a wild ride all the same.

“The fascination of spinal cord injury,” he wrote, “is how things change so astonishingly quickly and slowly; both.”