Nine years after a terrifying scuba accident crushed his spine, a paraplegic scuba diver is back in the water helping disabled divers.

Rich Osborn, 30, was teaching scuba diving on the Mediterranean island of Cyprus in 2009 when he had his life-changing accident.

The freak incident took place on August 23, 2009. Then aged 21, Osborn took part in a deep dive with other instructors when they ran out of air at a depth of 30m.

After reaching the surface, he was rushed to a decompression chamber but was left with permanent damage to his fourth vertebrae in the thoracic part of his spine.

Doctors told him he would never walk again after spending over a week in a decompression chamber and attend six months of rehabilitation classes.

Osborn now says he has found a new lease of life scaling mountains and helping other people with a spinal cord injury.

He returned to scuba diving twelve months after the accident and now teaches other disabled divers around Scotland and abroad.

He said: “Scuba diving was my life and I’m very lucky I could do that but I still want to travel and challenge as much as possible what I can do with a disability.

“Just because you have a spinal cord injury doesn’t mean you can’t get out there and achieve.” 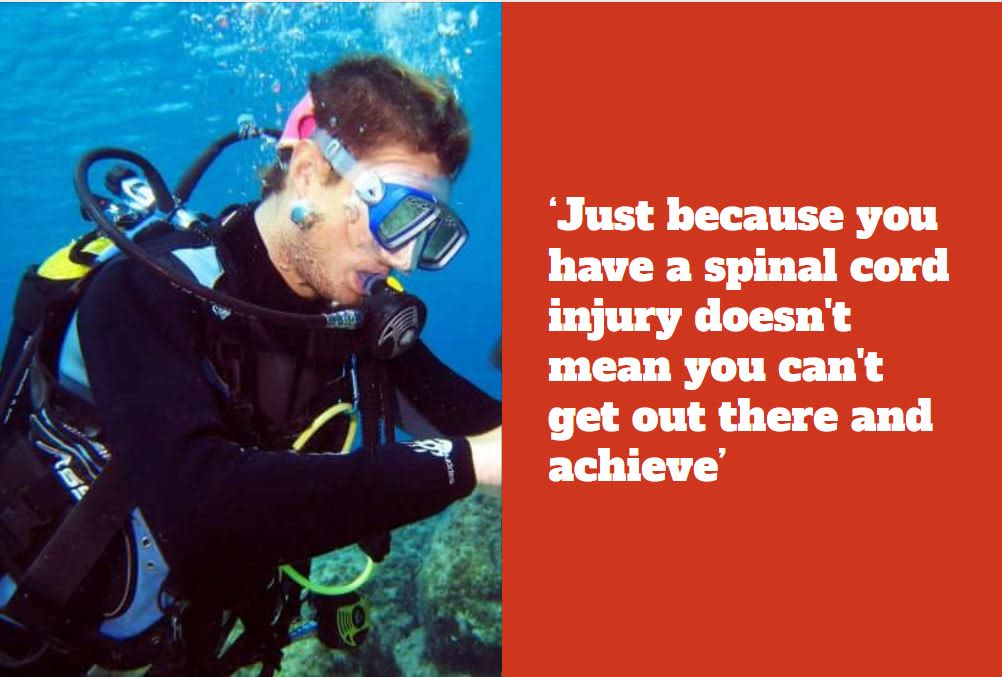 Osborn now lives in South Queensferry, West Lothian, set out on an adventurous deep dive with three other professional divers in south-east Cyprus.

The group, in turn, dived into the sea, using their fins to swim deeper to a depth of 40m – 10m deeper than the instructors would take their clients.

But 30m deep the group’s air supply ran out completely and they were left facing a frightening ascent to the surface.

Osborn received help from the spinal injury charity Back Up – a national charity that supports people affected by spinal cord injury – who teach wheelchair training at the hospital’s spinal injuries unit.

After his accident, Osborn got involved with the charity as an outreach and support coordinator, conducting wheelchair training classes at Glasgow’s Queen Elizabeth, which houses the only spinal unit in Scotland.

As part of his work with the charity, Rich has scaled Snowdon – the highest mountain in Wales – in a specially adapted wheelchair with help from Back Up staff and volunteers. Along with 12 other teams, Rich’s group raised £5,000, contributing to a grand total of more than £60,000.

Rich said: “The wheelchair training’s been great and is still very much a big part of my work.

“I came full circle with my Back Up journey and I’m really proud of my time here.”