SPOKANE, Wash. – From Coeur d’Alene to the Cascades, one Washington man is going the distance to prove that everyone should be able to access the outdoors.

Ian Mackay, 36, started his outdoor odyssey Sunday, in Coeur d’Alene. That was the first stop on the 485 mile long trek to Port Angeles.

Before you find out how Mackay plans to take his wheelchair through hundreds of miles of hot, smoky weather, you should know why he’s doing this.

In 2008, Mackay was going to college in Santa Cruz, California. He was an adventurer and passionate cyclist. He was biking home one day, speeding down a hill, when he hit a patch of sand and crashed into a tree.

He broke his neck and became paralyzed at the age of 26.

“When you lose your body at that age, you don’t know what the future has in store for you,” Mackay said.

He went through some dark times, losing sight of what kind of a life he could have.

That changed when he met Todd Stabelfeldt. He was paralyzed 31-years-ago when someone shot him in the chin.

Together, they’re a dynamic duo that share a bond that’s hard to find.

“He’s a classic hippie and I’m all corporate America. So, it’s just a hardcore yin and yang,” Stabelfeldt said.

Mackay said Stabelfeldt isn’t afraid to push him, even when the road looks too long.

“TBC, taking care of business, that’s just what he’s about. It’s what I’m about,” Stabelfeldt said.

Connecting with Stabelfeldt and with nature helped Mackay heal.

“To see the wildflowers blooming or the migrating birds coming over, it reminded me that I was still the same guy and I could still have the same passions and interests. I just had to experience them in a different way,” Mackay said.

But he soon found there were some barriers to accessing nature. That’s why he planned this long trip from Idaho to western Washington. He wanted to make sure that anyone, no matter their ability, can enjoy the trails and paths that lead to wild places.

If it takes him 13 days and 485 miles in the elements to create change, he’ll do that and more. After all, this is the second time he’s crossed a state to prove a point.

In 2016, Mackay set off in his wheelchair to cross Washington from the north end to the south end. He gained state-wide attention, including from Governor Jay Inslee. That trip inspired him to start his nonprofit, Ian’s Ride.

His friends and family have been there the whole time, too. 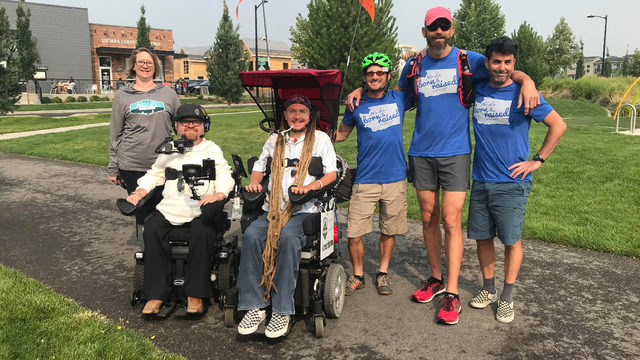 Three friends are biking and running the entire trip with Mackay. They’ll be with him every mile as he encourages people to live life and live it to the fullest.

“Find that thing that makes you excited to wake up in the morning and really chase it. Really go after that. For me, it’s being outside and seeing what’s around the next bend or over the next hill,” Mackay said.

You can follow Ian’s Ride’s journey across the state here. Mackay said he’d love to see bikers, runners, or other people in wheelchairs join their mission and trip.

Smart-e-Pants takes the pressure off

Make Them Go Away- Book