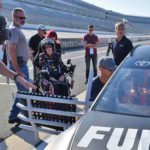 It was a sunny morning Thursday at Dover International Speedway, and, with a full NASCAR slate scheduled for the weekend, it came as no surprise that the thunderous roar of a stock car rattled the air at the Monster Mile.

The No. 78 flat-black Toyota Camry, owned by Furniture Row Racing, was screaming around the track, but it was not the reigning Monster Energy NASCAR Cup Series champion, Martin Truex Jr., behind the wheel.

The driver was Janette Lawler, a retired lawyer from Wheat Ridge, Colo., just outside Denver. It was only the second time Lawler had driven a car in a quarter-century. In 1992, she hit a patch of black ice in Colorado and crashed. The accident injured her spinal cord and left her classified as a C-4 quadriplegic. She cannot move anything below her shoulders.

Still, Lawler did four laps in a car that had been modified to be operated by those with disabilities. In Lawler’s case, she controlled the speed basically by breathing through a straw attached to a space-age helmet she wore. The yet-to-be-named helmet is linked to the car, and she turned it by moving her head in the direction she wanted to go — straight and left turns around the mile-long oval.

“I had practiced in the car a few weeks ago, but the track was completely different,” Lawler said. “They call this the Monster Mile for a reason, and it’s definitely got some slope to it.

“This was a blast. It takes a lot of concentration. I don’t know how fast I was going. There is no speedometer in there, which is probably a good thing.” 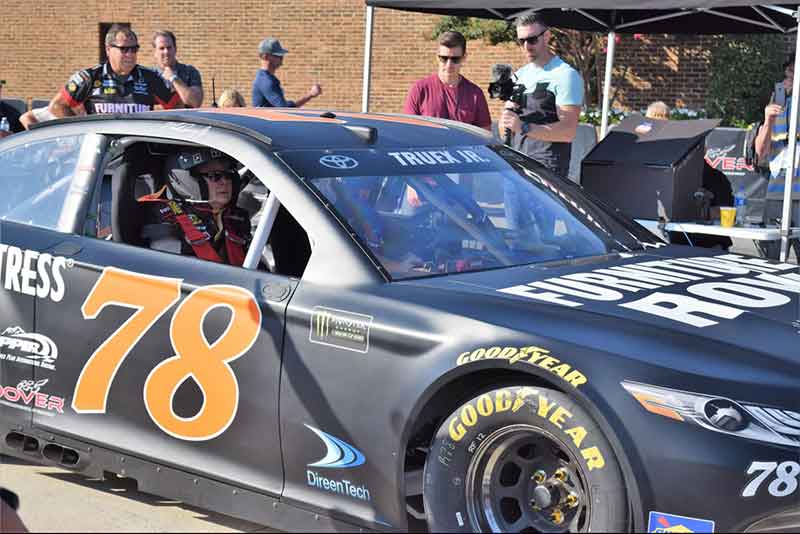 Lawler had come to Delaware to take part in Adaptive Motorsports Race Day with Monster Energy driver Regan Smith. The event, organized by Falci Adaptive Motorsports and Furniture Row Racing, brought about a dozen people with physical disabilities to ride in or drive the stock car, which is equipped with cutting-edge technology and brings mobility to paraplegic, quadriplegic and disabled people.

Some rode along with Smith, and others took advantage of the special hand controls or the adaptive head and mouth control helmets to operate the car themselves.

“I’ve been working with people with spinal cord injuries for years,” said Scott Falci, chief neurosurgeon at Craig Hospital in Denver and founder of Falci Adaptive Motorsports. “Many of them were involved in adaptive sports.

“A few years ago, I had a patient who was an avid amateur race-car driver before his injury. He told me he’d really love to get in a race car again. That’s when the light bulb went on. I didn’t know of any adaptive motor sports for spinal cord patients.”

Falci worked with some car builders in Colorado and developed an adaptive Corvette for paraplegics, and sent them out on a road course. His group also approached Ball Aerospace & Technologies and Arrow Electronics about building a Corvette for quadriplegics.

They came up with the “Sam Car,” named after former Indy Car driver and current team owner Sam Schmidt, whose brief driving career was ended in 2000 by an accident that left him a quadriplegic.

In 2014, the Sam Car debuted at the Indianapolis Motor Speedway.

The group then approached Furniture Row Racing owner Barney Visser, whose team is based in Denver, about bringing the program to NASCAR. Visser loved the idea. He donated two NASCAR Cup Series cars to Falci’s project and told him to make it work. Furniture Row also sent its garage crew to help modify the cars.

The helmet, which has yet to be named, is something out of the Twilight Zone. 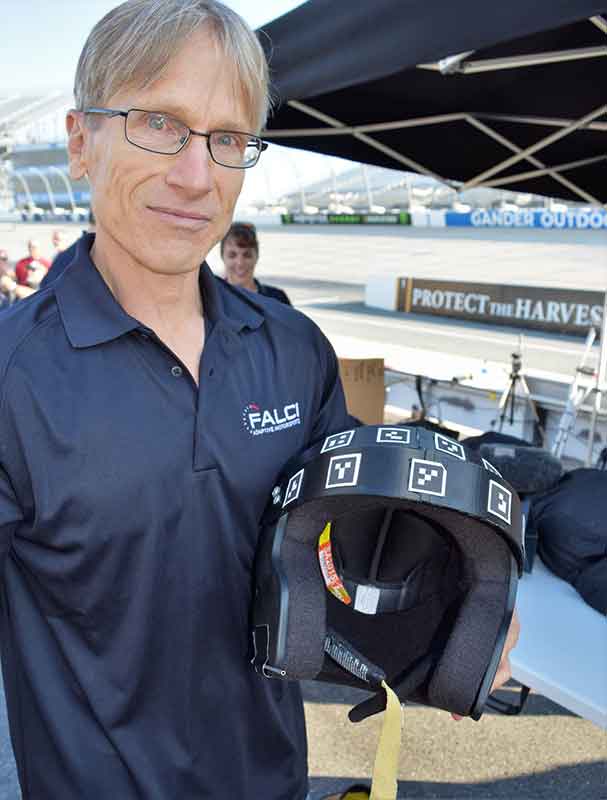 Falci said there is an accelerometer attached to the helmet and car that detects head movement relative to the car, so that if the head turns to the left (relative to the car), then the car turns left, and if the head turns right, the car turns right. There is also a series of cameras in the car that follow the movement of the helmet, which adds some fine tuning to the steering by the accelerometers.

The straw on the side of the helmet controls speed and braking. When puffed into with slight pressure, it engages the accelerator and moves the car forward. Decreasing the puff decreases the acceleration, and a slight sipping of the straw engages the braking.

All the data from the accelerometers, cameras, and straw are fed into a computer, which then actuates the braking and steering into a smooth ride.

“Spinal cord injuries seize people’s lives on a dime,” said Falci, adding the ultimate goal for his helmet is to make it work by thought. “You have people who are active and athletic, and suddenly they are in a wheelchair.

“The desire to be active is still there, but physically things have changed. … If you can adapt the equipment or the tools of the sport, they can get out there and feel a little more normal. When we bring people to these sports cars, they get really excited, because they can see what they can still do.

“You put them in an 800-horsepower NASCAR race car and put them on a track to drive it. That’s really cool.”

After 13 seasons, Furniture Row Racing recently announced it was closing its garage after the 2018 Monster Energy season, but Visser has assured Falci that his support and work with Adaptive Motorsports would continue so they can keep bringing it to NASCAR events.

Alena Nichols was an avid snowboarder. In 2000, she over-rotated while attempting a back flip and landed back first on a rock. She broke her T10/11 vertebra, leaving her paralyzed from the waist down.

Nichols did not give up her passion for sports. She began playing wheelchair basketball and excelled to the point that she was given a scholarship to compete for the University of Arizona. She then won a gold medal with the U.S. team at the 2008 Beijing Paralympics.

The Team Toyota athlete then returned to the slopes and competed in the 2010 Winter Paralympic Games in Vancouver, winning three medals, including gold in downhill sitting and giant slalom sitting.

She came to Dover from Reno, Nev., to participate because her boyfriend, Roy Tuscany, is a huge NASCAR fan. He suffered a spinal cord injury in 2006.

“He’s in love with NASCAR,” said Nichols, who has five Paralympics medals and is the only American with gold in the Summer and Winter Games. “I do love to go fast, and I really wanted to drive this car. 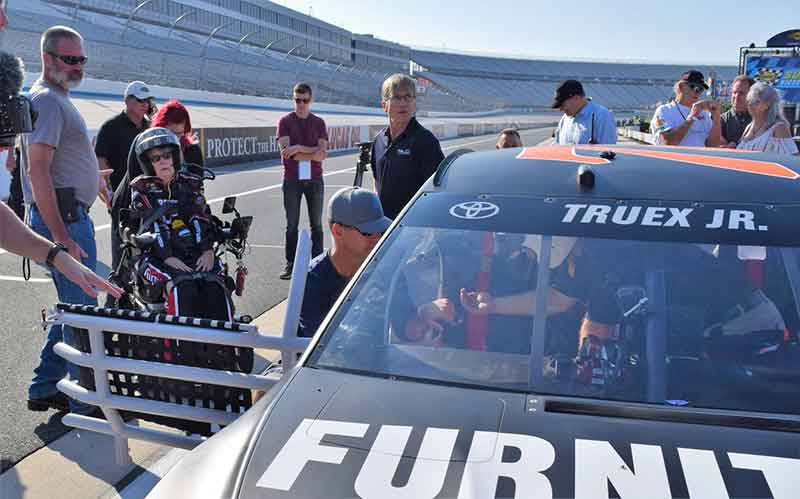 “I think these machines are amazing. It’s cool just to be next to one, much less get to drive it.”

When the No. 78 Toyota fired up its engine, Tuscany simply said, “That’s legitimate.”

He and Nichols flew in Wednesday night and were scheduled to fly to Dallas on Friday morning.

After his injury, Tuscany started a nonprofit called High Fives. The mission is to raise awareness for injury prevention in outdoor action sports and to provide resources and support to those who have suffered life-altering injuries.

Over the weekend, his group was scheduled to take 13 U.S. veterans who have been critically wounded to a wave pool and teach them how to surf.

“I think sport is a byproduct of success,” he said. “When you can reintroduce sports into an individual’s life in an adaptive fashion, it really allows them to regain their identity back.”

As Lawler passed the other cheering drivers still waiting their turn, she raised her arms as she guided the car with her head.

“There are things that happen when you become disabled,” Nichols said. “A lot of doors can close, but a lot can also open, depending on how you look at it.

“This an event that is opening a door for a lot of people with disabilities, including those with high-level ones. People who are confined to wheelchairs are driving a race car. That’s amazing. It’s going to make a difference in people’s lives.”