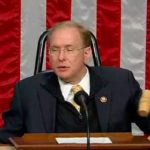 WASHINGTON, DC  — Congressman Jim Langevin (D-RI), the first quadriplegic elected to Congress, presided over the U.S. House of Representatives Jan. 3, during the opening day of the 116th Congress.

As Speaker pro tempore, Langevin managed debate on the first day of the new Democratic majority as the House prepared to vote to end the Trump shutdown.

Langevin, co-chair of the Bipartisan Disabilities Caucus, made history in 2010 when he became the first quadriplegic to act as Speaker pro tempore. Earlier that year, a series of lifts had been installed on the House floor to make the Speaker’s rostrum wheelchair-accessible. Langevin presided over the House during consideration of a resolution commemorating the 20th anniversary of the Americans with Disabilities Act.

“Presiding over the House of Representatives is an incredible privilege, and I am honored Speaker-designate Pelosi has given me the opportunity to take the gavel on opening day,” saidLangevin. “The American people elected our new Democratic majority to enact a more positive and forward-looking agenda. Serving as Speaker pro tempore tomorrow reaffirms our commitment to creating a more inclusive government that works for everyone.”

A standing ovation for @JimLangevin on the House floor. He'll be the first Speaker Pro Tempore of the 116th congress and will preside over the House shortly pic.twitter.com/ct1xHUEPeM

“As Speaker, when America marked the 20th anniversary of the landmark, bipartisan Americans with Disabilities Act, it was my honor to implement changes to our institution to make it possible for our colleagues with disabilities to preside over the House,” saidSpeaker-designate Pelosi on Wednesday. “Now, it is my great honor and joy to build on that progress by selecting Congressman Jim Langevin to serve as the first Speaker Pro Tempore of the new Congress. Together, we are proudly reaffirming a fundamental truth: that in our nation, we respect people for what they can do, not judge them for what they cannot do.”