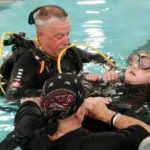 As her father guided her wheelchair down the ramp alongside the Kennedy Krieger Institute’s pool on Saturday, 12-year-old Tylena Fisher fiddled with the folds of the borrowed wet suit she was wearing, and took a few deep breaths.

This is a girl who loves the feel of water sluicing around her limbs, who until recently was working on her underwater swimming, who takes every opportunity to spend time in the water.

But Saturday was the first time Tylena had been anywhere near a pool since the otherwise ordinary June 2 when she was playing with a friend. Just 90 minutes after the pre-teen felt pain in her legs — the first symptom of a spinal stroke — she became paralyzed from the waist down.

“You look like a water ninja,” her 10-year-old brother, Seth, told her.

Tylena is one of about 20 patients being treated at Kennedy Krieger Institute’s International Center for Spinal Cord Injury who took part Saturday in an introductory scuba class sponsored by the Cody Unser First Step Foundation http://codysfirststep.org. The nonprofit corporation based in New Mexico aims to raise funds to research and fight paralysis and to improve the quality of life for patients with spinal cord injuries. (Unser, 30, is the daughter of Indy 500 car racing great Al Unser Jr.)

For Unser, who like Tylena has been paralyzed since age 12, a big part of her quality of life is scuba diving. It might sound unlikely, but scuba is a sport that even quadriplegics can participate in, according to the center’s clinical director, Cristina L. Sadowsky.

“Anyone who isn’t dependent on a ventilator can scuba dive,” said Sadowsky, who has been Unser’s doctor for nearly two decades. “I always say that remaining active is the fountain of youth.”

John McVey, 57, of Bel Air, marveled at the “awesome” sense of effortlessness he got from propelling himself through the water with an oxygen tank strapped to his back. McVey has been paralyzed since 2007, when he fell from a tree while pruning high branches.

“When you’re paralyzed, you’re constantly weighed down,” he said. “In the water, I felt so light. I want to do it again.”

Tylena’s father, Dennis Fisher, slipped into the pool and helped instructor Bill Monsam lower his daughter into the water. She lay back, rested her head on the surface, and for a few brief moments, closed her eyes.

Then she did something that made occupational therapist Kaitlin MacDonald smile.

Ever so slightly, Tylena was moving her right leg. It was no more than a few inches, but still — Tylena’s mind was telling her leg what to do, and her leg was responding.

“A lot of times, we’ll see movement first in the water,” MacDonald said. “It means a capacity is there that we can build on, but it’s still weak.”

Cody Unser first became interested in scuba diving as a possible therapy after her brother persuaded her to give it a try. In 2002, she was about 100 feet underwater when she noticed a pinprick tingling in her legs — the first sensation she’d felt in those limbs in three years.

That was so intriguing that in 2011, Sadowsky conducted a pilot study of 10 patients to see whether scuba diving helped them, too. Many showed temporary improvement in such areas as spasticity (or stiffness) and sensitivity to light touches, and the upturn continued for several days. Sadowsky thinks this might be a result of the increased pressure people experience while deep under water, resulting in an influx of nitrogen into their blood and body tissues.

“That may create a cascade of intracellular changes that facilitate the production of neurotransmitters impacting the spinal cord,” she said. “It’s a very good theory and we hope some day to test it in a clinical trial.”

Part of Unser’s project involves training physical and occupational therapists as certified scuba divers so they can develop these skills in their patients. Eventually, she hopes to raise enough money to take groups of patients and therapists on week-long scuba diving trips to locations such as the Cayman Islands or Cozumel.

For Tylena, it felt great to just be back in the pool. She wrapped her arms around her father and briefly lay her head on Dennis Fisher’s chest. He kissed her chin and she pretended to bite his nose. Then she turned to Monsam and formed an “O” with her forefinger and thumb — the scuba diving hand signal indicating she was ready to swim the length of the pool.