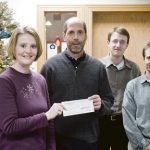 Sometimes a helper needs help.
For more than two decades, this woman worked as a registered nurse.

She made a career of caring for others, even after being in a car accident and sustaining a spinal cord injury that left her partially paralyzed.

“I did rehab and Physical Therapy and got my left side working again,” she said.

Then, she was back at work until she couldn’t do it anymore.

“I just got weaker and weaker,” she said.

She had developed a rare disease, the same condition that took the life of golf legend Bobby Jones.

Syringomyelia is a disorder of the Spinal nerves that causes paralysis, numbing and pain.

“My life changed dramatically as the result of that. I’m now at the point of being in a wheelchair,” she said.

“My husband has done everything he can to help me.”

Because he’s her main caregiver, the couple’s income is very limited.

She said they’re in such poor financial straits, they’re close to not being able to keep their house.

That’s just one of many challenges she’s having difficulty facing.

“All my life, I’ve never taken unemployment or any help like that at all, until I was disabled,” she said.

Things have become even more difficult this year because she developed a condition common in people with spinal injuries.

“My blood pressure goes sky-high or way, way down,” she said.

“I don’t know how many ambulance runs I’ve had since last year.”

Her husband said she’s fighting a courageous battle against her debilitating conditions.

“We’re pretty broke and deeply in debt,” he said.

There isn’t any money left for any extras.

Asking for help, even for just a bit of holiday cheer, isn’t easy for either of them.

“Getting to the point of having to ask for help has been hard,” she said.

You can help this family and many others by sending your donation to:

All donations are tax deductible. Every penny raised for Press Christmas for All goes to the needy families. The program is administered by The Hagadone Corp. and its volunteer partners at Kootenai County Fire & Rescue. It operates strictly through the assistance of volunteers.

The last day applications will be accepted is today.